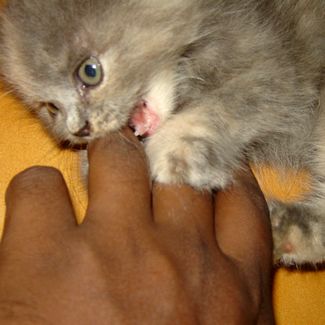 Cats, while being very popular pets, still display many behaviors that humans find very perplexing. One of the most common yet also odd behaviors of our furry felines involves the act of kneading. This behavior, which consists of cats pushing their paws down onto a soft surface like a baker “kneading” dough (hence the name), looks as if it should have an easy explanation.

However, as with many behaviors involving cats, there is sometimes no one simple answer. This is the case when wondering why do cats knead, and cat experts the world over have many interesting ways of explaining this behavior.

Theories on Kneading Behavior
Kneading is done mostly with a cat’s front paws, although many also use their back paws. An act that involves much rhythmic movement, it usually also involves the cat burying its face into whatever surface they are kneading, such as a blanket or other item. Done at all stages of a cat’s life, there are several theories used to explain this seemingly carefree behavior.

Since kneading happens at all stages of a cat’s life, it begins when they are kittens. Most veterinarians and other experts believe kneading is related to when a kitten is nursing. Studies on kittens kneading have shown that doing so while nursing leads to increased milk production from their mother, therefore helping them get more to eat. Kneading has also been shown to be done by cats who were both taken from their mothers at a young age as well as those who stayed with their mother longer. Older cats who knead are believed to be in effect reliving their childhood, bringing back the feelings of safety and motherly love.

Young or old, it’s agreed happy cats are ones that knead the most. Cats who feel safe and secure are often seen kneading, while those who are scared or mad rarely do so. While kneading, cats usually purr and have a very happy and satisfied look on their face. When a cat kneads a human, it should be considered a very high compliment from the cat. When this happens, the cat is expecting a return of its affection, often in the form of petting or additional food or treats.

Cats can often be seen kneading before they are preparing to take a nap. Many behavioral experts have concluded that the ancestors of today’s modern cat probably kneaded the grass under their feet to create a comfortable bed for sleeping. It’s thought this behavior is part of a cat’s genetic makeup, which is why domesticated cats have carried on the tradition.

Cute, But Painful
While kneading is basically a harmless behavior, it can have some drawbacks for cat owners. For anyone who has had a cat knead their lap, they realize it can sometimes be a bit painful.

To make kneading a pain-free process, owners can keep their cat’s nails trimmed or put a blanket or old shirt in their lap to absorb the cat’s claws. If a cat is kneading furniture and ripping the fabric, it may be necessary to place a blanket or slipcover over the furniture or keep the kitty in another room away from the furniture. Because cats associate kneading with happiness, they should never be punished when kneading. Instead, it’s better to find practical solutions to make kneading time pleasant for the cat and its owner.

For those who own cats, there is no better sight than a cat that is happy and secure in its home. By paying attention to your cat and providing them with a wonderful home full of love, there will be many more times when the rhythm of paws moving up and down will be observed.

Is My Child Ready for a Puppy?
Previous Post: « Do Penguins Have Feathers?
Next Post: Can Cats Eat Dog Food? »