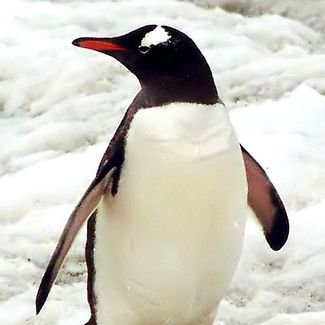 Do penguins have feathers? Yes, penguins do have feathers. In fact, despite their flightless status, they probably have more feathers than other most other types of birds, though their feathers have been adapted for their unique habitat..

Description of a Penguin’s Feathers
A penguin’s feathers are shiny, small, uniform and overlapping. They create a “coat” that provides insulation for the penguin. There are actually two different layers of feathers. The outer layered feathers are formed close together forming a seal designed to keep the penguin warm in the antarctic waters. The inner layer is made of very small feathers that are similar to the ones found in down jackets. These provide an extra layer of insulation. When a penguin flaps their wings, they are usually attempting to release the warm air trapped against their body by the feather causing their bodies to get too hot.

Why Do Penguins Swim Instead of Fly?
This is largely due to the shape of their body and wings. Their wings are very thin and short compared to flying birds. Since their bodies are heavy from a thick skeletal structure and dense feather formation, their wings can’t create enough air flow to propel them off the ground and through the air. However, their wings are much more useful as flippers. They act as propellers thrusting the penguin through the water. There bodies are also made for swimming. They are tapered at both ends forming a missile shaped object capable of cutting through the currents. In the water, they can travel up to speeds of 17 m.p.h.

Other Interesting Facts About Penguins

Penguins are one of the most studied species within the animal kingdom. Their unique social structure, mating rituals eating habits and natural habitats make for exceptional research. While studying them in their natural habitat is not an easy thing to do, there are wildlife parks throughout the world who have successfully developed captive habitats sufficient to study this amazing bird while in captivity.

Anyone who has never had an opportunity to observe these wonderful little creatures should plan a visit to the appropriate wildlife facility and learn about the wonderful world of penguins.

Are There Any Cultures That Still Practice Cannibalism?
Previous Post: « Where Do Bed Bugs Come From?
Next Post: Why Do Cats Knead? »