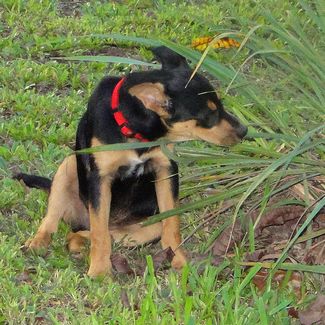 People seem to be amazed when they see a dog stop and graze in the grass. It seems to be an unnatural act for a domesticated animal. The reality is that many dogs do eat grass and they seem to like it. The question is; Why Do Dogs Eat Grass? After decade and decades of research, no one has really come up with conclusive evidence as to why they actually eat the stuff. Without scientific evidence, the best answers come in the form of conjecture and informed opinion from experts and veterinarians who have surely contemplated this question whenever they receive calls from dog owners concerned by their dog’s sudden appetite for grass.

History
A look at early canine history reveals the fact that dogs were never exclusively considered to be carnivores. They actually dined much like scavengers. They would eat whatever they could find. Many times, that would be restricted to fruits and plant vegetation. Some scientists believe this was enhanced by the fact that dogs would also feed on other animals who were essentially omnivores. The wild dogs would eat all parts of their prey including the digestive systems which was full of plants and grass. This created a so-called craving within the canine population. In other words, eating grass could be considered instinctive.

Medicinal Grass
As man’s best friend, we have learned that dogs are actually very intelligent. Some researchers assert that dogs may search out grass as a home remedy for an upset stomach or possible parasites that are nibbling away at their digestive system. Once again, the instinct for self preservation may have taught the canine that grass was actually good for their systems. When a dog is sick, they can be seen feeding on large clumps of grass until they vomit. There is really no cause for concern as the process may be intentional helping to clear the system of those nasty bugs.

Nutritional Value
As dogs became domesticated, humans assumed their diets should be limited to meats and meat products. What most experts claim is that dogs are acting on instinct using grass as a means of getting the nutrients that aren’t getting from commercial dog food or table scraps. Experts and veterinaries often recommend cooking up a plate of veggies for the dog every once in awhile, particularly if the dog is frequently munching on the front lawn. If the eating of grass becomes excessive, you might want to visit the veterinarian as they dog may be indicating his body is in some kind of distress.

Practical Reasons
Before people get too carried away with research and scientific experiments, it might be a good idea to look to common since for the most likely answer. Maybe, your doggie is just a bit hungry and looking for a little snack. If the grass tastes good enough and is covenient, you may be able to save a lot of money on doggie treats.

The reasoning furnished above suggests one important thing, no one really knows why dogs eat grass. Each of the reasons provided above do seem to have a basis in logic and reality and may very well be correct. It is also possible dogs eat grass for all the reasons stated above. What we do know is that dogs are doing now what they have done for centuries, they seem to love eating grass.

What Do Turtles Eat? It Varies Based on Habitat [Infographic]
Previous Post: « What is the Highest Credit Score Possible?
Next Post: Why Do Dogs Eat Poop? »