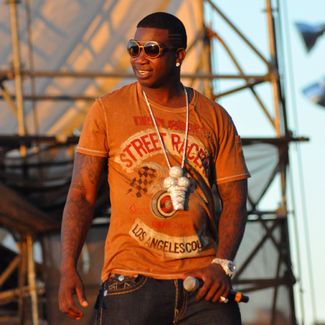 Gucci Mane, born Radric Delantic Davis, is a successful rapper and one of the pioneers of trap music. He gained notoriety due to his flourishing music career, but also managed to diversify his income from acting roles and business ventures. But since we can’t possibly bring up the phrase ‘Gucci Mane net worth’ without listing his many accomplishments, let’s review exactly how the Alabama native rose to fame.

In 2010, Forbes listed Mane as #20 on their list of Hip-Hop’s Top 20 Earners. He ended up sharing his entry with Lil’ Jon and Rick Ross. Mane will go down in history for pushing trap music, a hip-hop subgenre, into the mainstream. He was among the first artists to significantly promote trap to the general audience, to great success. As a result, the Gucci Mane net worth reflects the enormous influence he has in the musical industry. But how did he get here?

The rapper was born in Birmingham, Alabama. His single mother raised him in Atlanta, Georgia, where he currently resides. Mane began his rap career in 1994, at the age of 14. In 2005, he independently released his debut album, Trap House. The American rapper had ten other singers featured on his very first production – Young Jeezy, Young Snead, Boo, Torica, Khujo, Bun B, Mac Bree-Z, Lil Scrappy, Jody Breeze, and Killer Mike.

In 2009, Mane’s first taste of major label success came with the release of The State vs. Radric Davis with Warner Bros. Since then, the rapper released several successful record and mixtapes, which he keeps doing to this day. His most popular records include Everybody Looking, The Return of East Atlanta Santa, El Gato: The Human Glacier, and Evil Genius.

Mane’s history is riddled with multiple arrests on drug and assault charges. In 2005, Mane was charged with murder, but the charge would later be dropped. He was also arrested multiple times for drug possession, probation violations, traffic charges, and assault. His last lawsuit took place in 2014 when Mane pleaded guilty to possession of a firearm by a convicted felon. The judge sentenced him to prison; he was released from United States Penitentiary in Terre Haute on May 26, 2016. While the Gucci Mane net worth took a hit during the time he was incarcerated, he managed to bounce back quickly. The judge, Steve Jones, had some crucial advice for Gucci Mane he decided to dispense during the proceedings:

Gucci Mane Net Worth: How Much?

So how impressive is the Gucci Mane net worth in 2019? The rapper is reported to have amassed a $12 million fortune, even though he’s no stranger to hard times. His spending habits are erratic and he faces numerous legal issues regarding child support, tax evasion, and alleged theft by former associates.

In November 2013, Mane filed a lawsuit against former manager Debra Antney and her son, former Brick Squad artist Waka Flocka Flame, along with several other parties affiliated with the label. The suit accuses them of fraud, racketeering, and breach of contract. Mane also accused Antney of withholding royalties, manipulating the costs of label expenditures, and theft of some of his personal assets, including several expensive pieces of jewelry.

Wondering how Mane managed to make his money? Besides his successful music career, the rapper is also known for his skills as an actor and entrepreneur. Mane made his acting debut in 2012, in the movie Birds of a Feather. He also appeared in the hit movie Spring Breakers during the same year. He published a memoir, The Autobiography of Gucci Mane, which he mostly wrote during his time in prison. He’s still presiding over the label he created, 1017 Records, and has a clothing line called Delantic. Having multiple streams of income is not only smart but pretty much mandatory when you work in an industry so volatile like the music biz.

Davis is married to wellness entrepreneur Keyshia Ka’oir, founder and owner of Ka’oir Cosmetics and Ka’oir Fitness, back in 2017. The wedding was an extravagant affair, sponsored by BET, which produced a reality show to mark the occasion. Gucci Mane & Keyshia Ka’Oir: The Mane Event followed the two as they organized the proceedings and tried to bring their families together. The ceremony itself was as glamorous as celebrity weddings get – Ka’oir walked down the aisle on a carpet sprinkled with diamonds.

Elsewhere, Mane revealed in his biography that he has a son he only found out about in 2016. The rapper also made a name for himself as a controversial figure after his many feuds with fellow artists, including Young Jeezy, Keyshia Cole, and Waka Flocka Flame.

What Is the Rapper Up to Now?

The rapper’s career continues to be on an upward spiral. He released a new album in 2019, Delusions of Grandeur, which includes collaborations with Wiz Khalifa, Justin Bieber, and Rick Ross, among others. The album was well-received, with the record debuting at No. 2 on Billboard’s Top Rap Albums chart. If the rapper keeps producing quality music and staying away from legal troubles, we can only expect the Gucci Mane net worth to keep growing over the next few years.