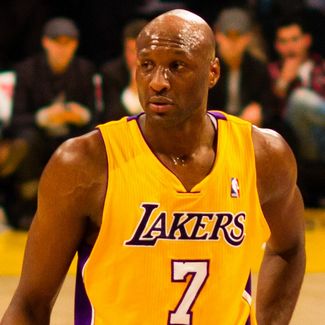 Lamar Odom is a famous ex-basketball player, who played for both the Los Angeles Lakers and Los Angeles Clippers during his time in the NBA.

Odom is also famous for being married to celebrity Khloe Kardashian, and is set to go through a high profile divorce over the coming months.

Lamar Odom Net Worth
Records obtained by reliable sources suggest that Lamar Odom is worth $56 million when all of his earnings from basketball, sponsorships and investments are taken into account. Odom had a storied basketball career.

Odom was a key part of the Lakers team that won back to back NBA Championships in 2009 and 2010. Odom was the “sixth man of the year” during those seasons, dovetailing with the likes of Kobe Bryant, Pau Gasol and Derrick Fisher.

Lamar Odom spent the first five years of his NBA career at the Clippers, before he moved to the Miami Heat for two years. He returned to LA with the Lakers in 2004, and stayed with the team until 2011. An unsuccessful couple of years with the Dallas Mavericks and Clippers drew his career to a close. Odom is a 2 time NBA Champ, and a Bronze medalist at the 2004 Summer Olympics in Athens.

According to most news sources, Odom’s life has been in disarray over the past few years. He has struggled on the basketball court and with his marriage to Khloe Kardashian-Odom. After some public spats between the two, and reported drug use by Odom, it appears as though they will be getting a divorce. This means that Lamar Odom is likely to lose half of his net worth, which amounts to about $28 million.

Halving the money of an athlete that is retired represents a huge blow to his financial future. Odom will have to make sure that he is more careful with spending in the future, unless he plans on finding another career outside of basketball.

Now that Lamar Odom is no longer playing on an NBA team, his earnings have dried up over the past 12 months. He is unlikely to make a professional comeback, although he could sign for a European team to continue his career.

Odom does not have any endorsement deals right now, nor is he an active participant on any of the Kardashians’ TV shows. It appears as though his main sources of income are no longer a present factor in his life.

Reports from TMZ state that Lamar Odom spent close to $800 a day funding his drug addiction during the past summer. In addition, he spent a great deal of money staying in hotels while he was separated from his wife.
Odom has also spent $4 million on his home, which he co owns with Khloe Kardashian-Odom.

Robert Downey Jr. Net Worth
Previous Post: « How Much Is Jay Leno Worth?
Next Post: How Much Is DMX Worth? »