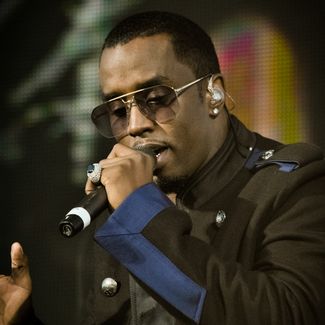 With an estimated net worth of $580 million, rapper, producer, and entrepreneur P. Diddy is considered the highest earner in hip-hop. Known especially for founding Bad Boy Records, Diddy has ushered many artists into stardom, most notably the late Notorious B.I.G. P. Diddy has won three Grammy Awards and is involved in several non-music business ventures as well, such as his Sean John clothing line and two restaurants.

Born Sean John Combs in Harlem, Diddy was raised in Mount Vernon, New York and and graduated from the Roman Catholic Mount Sinai Michael Academy in 1987. He claims that he was given the nickname “Puff” because as a child he would “huff and puff” when he got angry, and “Daddy” is another way of saying “player,” thus giving him his well known nickname Puff Daddy.

Combs attended Howard University where he majored in business, but dropped out in 1989. He then became an intern at New York’s Uptown Records. While talent director at the label he helped developed R&B acts Jodeci and Mary J. Blige. In his college days, Combs had a reputation for promoting/hosting parties, some of which drew crowds of up to a thousand participants. In 1993, after being fired from Uptown Records, Combs founded Bad Boy Records as a joint venture with Arista Records. In establishing Bad Boy records he took new artist The Notorious B.I.G. with him.

P. Diddy Spending
P. Diddy is the father of five children, and in 2010 he presented his oldest son Justin with a $360,000 Maybach car as a sixteenth birthday present.
Diddy owns a home in Alpine, New Jersey, which he reportedly purchased for $7 million. His winter home in Miami Beach was purchased for $14.5 million in 2003.

The number of ventures he is involved in is a key part when finding how much is p diddy worth. He is considered a very talented and ambitious individual.

How Much Is Eminem Worth?
Previous Post: « What Does A Respiratory Therapist Do?
Next Post: How Much Is TI Worth? »