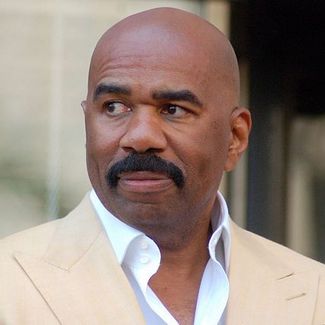 A famous comedian, TV/radio personality and author, Steve Harvey managed to build an impressive career thanks to its humor, charisma, and ability to inspire others. He went from being homeless to acquiring a massive net worth thanks to its perseverance and hard work, making him an example to anyone trying to get ahead in life. The comedian relies on multiple sources of income and is known for his ability to gracefully handle several projects at once. So how much is Steve Harvey worth in 2019? Let’s take a quick look at his spectacular rise to fame and tally up his earnings.

Though his celebrity status came mostly through his work as a comedian, the majority of Steve Harvey’s net worth has been the result of his multitude of other accomplishments as an entertainer. Harvey began performing stand-up comedy at the age of 27 and later went on to host the television variety show Showtime at The Apollo for seven years.

In the mid-‘90s, Steve Harvey had a role on the short-lived ABC show Me and the Boys and then starred in the WB Network sitcom The Steve Harvey Show, which lasted six seasons. During the sitcom’s run, Harvey and co-star Cedric the Entertainer embarked on The Kings of Comedy tour, along with fellow comedians D.L Hughley and Bernie Mack. A concert film, directed by Spike Lee and titled The Original Kings of Comedy, reached the #2 spot on the U.S. Box Office Charts in its opening weekend, just behind the Jennifer Lopez sci-fi thriller The Cell.

In addition to a lengthy career in stand-up comedy, Steve Harvey has hosted The Steve Harvey Morning Show since 2000. The show is syndicated on 48 urban radio stations around the United States and is distributed by Premiere Radio Networks.
Harvey has written multiple books, including Act Like a Lady, Think Like a Man; Straight Talk, No Chaser: How to Find and Keep a Man, and Act Like a Success, Think Like a Success: Discovering Your Gift and the Way to Life’s Riches.

Act Like a Lady, Think Like a Man was the basis for the 2012 romantic comedy Think Like a Man, starring Kevin Hart and Gabrielle Union. Made on a budget of roughly $12M, the film grossed over $99M worldwide and knocked The Hunger Games out to the #1 spot at the U.S. Box Office, holding that ranking for two weeks. Numbers that should be kept in mind when asking yourself how much is Steve Harvey worth.

In 2010, Harvey took over as host of the game show The Family Feud, replacing actor John O’Hurley. In 2012, Steve Harvey began hosting his self-titled syndicated daytime television talk show, which ran until 2016. The show was canceled, but the comedian bounced back quickly. He launched another show, titled simply Steve, in 2017, which ran until 2019. Harvey has also hosted the Miss Universe beauty pageant for the last four years.

Steve Harvey, born Broderick Stephen Harvey in West Virginia, attended Kent State University but dropped out after two years. He has been married three times and has seven children. Steve Harvey is a devout Christian and an outspoken supporter of Barack Obama.

Like many young artists, Harvey struggled financially during his early years in comedy, with a net worth well below the average for his age, until he rose to prominence. In fact, he was homeless at one point, sleeping in his car whenever he wasn’t performing gigs that put him in a hotel. He also had to shower at gas stations and swimming pools. On the 2013 birthday edition of his television talk show, Harvey had an emotional surprise reunion via satellite with a couple that supported him financially during the early days of his comedy career.

We can’t really answer the question How much is Steve Harvey worth? without mentioning his spending habits. With great power comes great responsibility – and with a great net worth comes big spending as well:

Let’s figure out how much is Steve Harvey worth by tallying up his multiple streams of income:

How much is Steve Harvey worth? is a complicated question, since there are a lot of numbers floating around. However, Harvey’s current net worth is estimated to be somewhere around $160 million. According to Forbes, the TV personality made $44 million in 2018 alone, comfortably ranking him as one of the world’s highest paid TV hosts.

Besides Family Feud, his radio show, and his daytime series, Harvey also hosts Celebrity Family Feud and was in charge of Little Big Shots for its first three seasons. He created the show with Ellen DeGeneres. Over the course of his career, Harvey won 14 NAACP Image Awards and six Daytime Emmys.

Following the abrupt cancellation of his daytime show Steve, Harvey hasn’t announced any new projects. Looking back on his fruitful career, however, we predict that he’ll choose to stay busy. As he wrote in Act Like a Success, Think Like a Success, “When we utilize our gift, the universe thanks us by giving us an abundance of riches — from abundant opportunities to good health to financial wealth.” A quote to live by.

How Much Is Usher Worth?
Previous Post: « How Much Is Snoop Dogg Worth? We Investigate
Next Post: What is Shaq’s Net Worth? Get Ready to Be Blown Away »