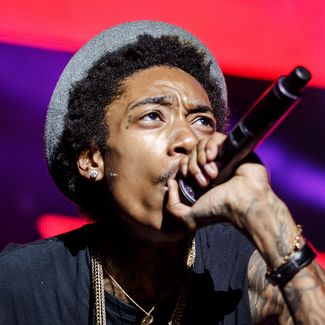 Wiz Khalifa, one of the world’s most famous rappers and singer-songwriters, has managed to build a vast fortune ever since he took his first step into the spotlight. Besides his successful music career, Khalifa is also known for his close ties to the marijuana community, as well as for his collaborations with other big names in the music industry. But since we can’t utter the phrase Wiz Khalifa net worth without listing the musician’s many accomplishments, let’s see exactly how he managed to climb his way to the top.

Wiz Khalifa was born Cameron Jibril Thomaz on September 8, 1987, in the small town of Minot, North Dakota. With both parents serving in the military, he was often moving from place to place and changing schools, not allowing many long friendships to build. His stage name is derived from a word in Arabic, the language of his ancestors, that means successor, and from his nickname, “The young Wiz” – because he states he was good at everything he tried.

At 16, Khalifa was contributing to mixtapes in the Pittsburgh area and caught the attention of Benjy Grinberg, president of Rostrum Records. Khalifa was quickly signed to the label, releasing his first mixtape in 2005, Prince of the City: Welcome to Pistolvania. This led to his debut album called Show and Prove in 2006, and two more mixtapes in 2007 after signing with Warner Bros. Records: Grow Season and Prince of the City 2. In 2009, he parted ways with Warner Bros. Records, touring with many artists around the country during this time.

In 2009, Khalifa released the mixtape How Fly and opened for Wu-Tang Clan at the CMJ Music Marathon in New York City. He released another mixtape later that year called Burn after Rolling, continuing to be inspired by marijuana when writing his tunes.

This would prove to be prophetic in the coming year. Rumors abounded that Khalifa signed with Atlantic Records in 2010, which later proved to be true. His fame continued to grow and he worked with bigger and bigger names in the rap business. His popularity exploded after being arrested in November 2010 for marijuana possession and trafficking. He paid the $300K bail and continued to tour and work on his music.

Khalifa released his first album with Atlantic Records, Rolling Papers, in 2011. The first single, Black and Yellow, peaked at number one on the US Billboard Hot 100 and was overall a massive success. Another album, O.N.I.F.C., followed in 2012. One of the singles from the record, Remember You, went platinum.

Khalifa’s success only grew from this point on. The rapper released Blacc Hollywood in 2013, as well as appeared on several mixtapes. He recorded See You Again in collaboration with Charlie Puth in 2015. The song, which was a tribute to actor Paul Walker, was an instant hit. His next album, titled Khalifa, dropped in 2016, with Rolling Papers 2 following in 2018. Between album releases, Khalifa toured and continued to collaborate with other artists and perform at award shows. All in all, he was always in the spotlight, which definitely gave the Wiz Khalifa net worth a significant boost.

Wiz Khalifa Net Worth: How Much?

Khalifa was number 11 on Forbes’ list of 2011’s highest hip hop earners, coming in with more than $11 million thanks to his single Black and Yellow. Since then, the Wiz Khalifa net worth continued to grow, earning him a spot among the richest rappers in the world. In 2019, he is estimated to have a fortune that revolves around $45 million.

The bulk of it is a result of album sales, touring, and promotional merchandise. However, Khalifa is also sponsored by The Cookie Company, a medical marijuana dispenser which sells a Khalifa Kush strain that the rapper helped create. Moreover, Khalifa wasn’t shy about showcasing his acting chops. In 2012, he appeared in two movies – Gangs of Roses 2: Next Generation and Mac & Devin Go to High School. He also lent his voice to a character in an episode of animated sitcom American Dad!

Khalifa started dating famous model Amber Rose in early 2011. The two got married in 2013 and have a son together, Sebastian Taylor. The relationship was pretty tumultuous, with Rose filing for divorce only one year later, in 2014.

As of 2018, Khalifa has been dating supermodel Winnie Harlow. The two made their red carpet debut in November, at the Victoria’s Secret Fashion Show.

What Is the Rapper Up to Now?

In 2019, Khalifa is busy touring. His The Decent Exposure tour will last all throughout the summer, with sold-out venues a common occurrence. Rumors say that the rapper is also gearing up to release a new album. If he keeps going like this, we can only assume that the Wiz Khalifa net worth will skyrocket in the near future.

How Much Is Snoop Dogg Worth? We Investigate
Previous Post: « How Much Is Nick Cannon Worth in 2019? Let’s find out!
Next Post: How Much Is Denzel Washington Worth? We Have the Numbers »