As one of the most well-known songs of the rock era, and the 49th greatest song of all time according to Rolling Stone magazine, chances are you’ve heard the famous song “Hotel California” by the Eagles from 1977 – unless you’ve been living under a rock.

The first thing we need to do is to admit the cryptic nature of the song’s lyrics. This has lead to it becoming the victim of several misinterpretations by both critics and fans alike. Some believed that the “Hotel California” was a real hotel in Baja California near Santa Barbara. This would make the Eagles vent about the hospitality industry. Others hypothesized that the band was referring to the Camarillo State Mental Hospital in Ventura County. Still others divined that this was a devil-worshipping song about Anton LaVey. He was a man who was notorious for converting people to Satanism. The threatening lyric “you can check out anytime you like but you can never leave” is fascinating. Most likely, this is to blame for these bone-chilling theories.

Despite popular belief, the Eagles turned down all the theories. They have confirmed that “Hotel California” actually has nothing to do with Satanism, psychiatric hospitals, or cocaine addictions. The hit song is actually an interesting examination. It focuses on the pitfalls of living within Southern California in the tumultuous 1970s. 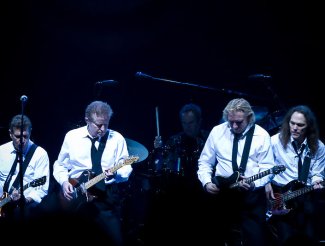 The song is written by Don Felder, Glenn Frey, and Don Henley of the Eagles. The “Hotel California” lyrics meaning focuses on the excessive materialism of California. However, it also hints at the same situation across the nation in the 1970s. Back in 2007, in an interview with the London Daily Mail, Don Henley approached the issue. He disproved the wilder interpretations as mere figments of the overactive public imagination. Instead, it’s all about the “uneasy balance between art and commerce.” The song was actually the Grammy winner for Record of the Year in 1977. “Hotel California” was merely the band’s interpretation of the high life in California. This was full of propaganda with the signature images of the stars on Hollywood Boulevard, for instance. Add the beaches with scantily clad women, and shining lights you could see for hundreds of miles.

The song is aimed the characteristic greed and hedonism associated with Hollywood during the time period. This includes the excess of drugs, piles of money, and easy women. Moreover, the Eagles admitted they themselves were drowning in these temptations. As evidence from the photographer for the album cover, he has stated that the picture was intended to represent the dramatic loss of innocence and rising growth of corruption.

Throughout the song, the lyrics entwine a surrealistic viewpoint into a fictional tale of weary travelers checking in for a night at a luxurious hotel in the heart of Los Angeles. Although the hotel draws the travelers in with its inviting and tempting appeals, they soon figure out that it is a nightmarish place they can never leave behind. In this tale, the “Hotel California” is an allegory about the inescapable musical industry within the dark underbelly of the American dream. While there are certainly real hotels with the name, you can’t find Hotel California in real life outside of the iconic Eagles song. It is a great metaphor for the charms of the West Coast and its effects on the unworldly musicians that fall into its glittering trap of fame and fortune without an escape.

How Much Do Hotel Managers Make?

What Was the First Sequel to Win an Oscar for Best Picture?

What Is Nas’ Net Worth?
Previous Post: « What Are The Health Benefits of Pistachios?
Next Post: Was Aunt Jemima a Real Person? »