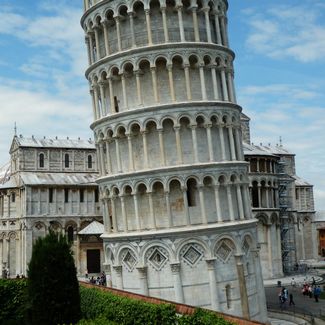 It’s been called an enigma, a beautiful mistake, and the ultimate civil engineering challenge. Today, the Italians are just trying to keep her standing, after nearly 850 years. The Leaning Tower of Pisa, a relic of medieval Europe, still stands on the old cathedral lawn in the provincial Italian town. The structure regularly attracts gawkers, who boldly ascend its internal staircase as if daring physics to finish the job.

The Leaning Tower has been a tourism hot spot since the 12th century. The 60-meter-high bell tower is inclined due south at 5.5 degrees from the perpendicular. Seeming to defy gravity, the 14,000-ton structure looms over sightseers on the cathedral grounds, all wondering at the improbability of its standing.

Out-of-Plumb: Why Does It Lean?
Although it is world famous for its unlikely lean, officials want to reduce the tilt to save the tower from collapse. To do that, they need to know how the lean got there in the first place. Why does the Leaning Tower of Pisa lean?

The Tower leans partly because of its shaky foundation. It was built on silty soils composed of loose mud, sands and clay. The soil is simply too soft for its weight. It is as though the building was founded on jelly. But it’s not just the soil. We now know there’s another force at work—the unruly water table below.

Besting The Florentines
The Leaning Tower was created in the Middle Ages as a grand testament to the sophistication of Pisa, the chief port of Tuscany. Just 50 miles west of Florence, Pisa was a major commercial and military hub. The elites of the city sought to flaunt its wealth to their chief rivals in Florence. In the twelth century, they commissioned the extravagant bell tower to overlook their walled territory.

Shortly after construction began, the building began to settle heavily into the ground. But the giant cylinder did not sink evenly across its diameter. Part of the foundation settled deeper than the rest. To make matters worse, the foundation, just three meters thick, was too weak for the whole package.

Still, the Tower would have eventually settled into a vertical position, engineers say, were it not for the fluctuating water table underneath. In 2001, an English geotechnical engineer uncovered the precise reason for the tilt: water tends to accumulate on the north side of the Tower, causing its south side to lean.

Making a Banana
The Tower narrowly missed several opportunities to fail during its construction. Over the course of two centuries, political disputes caused work on the building to grind to a halt, at the fourth and the seventh stories, respectively. Without these breaks, architects say, the Tower would certainly have fallen. The structure was able to adjust to its load at each cessation. This lengthy, irregular pattern of construction trained the landmark to hold its bizarre load, even as the tilt itself grew worse over time.

Meanwhile, each time new builders took over the project, they sought to compensate for the worsening tilt. They altered the higher stories by making columns and arches taller on the sunken side. Masons of the uppermost chunks tweaked the number of steps and tried to angle things so as to restore the center of gravity. As a result, the Tower developed a distinct curvature, as if trying to pull back from its tumble. The end effect is a building shaped like a banana.

Ongoing Challenges
But the leaning action of the Tower isn’t a moot point; it’s an ongoing process. Over the course of eight centuries, repeated cycles of settling and tilting have gradually twisted the Tower down and around. Even now, the tilt is dynamic. Will it eventually fall? Inevitably, yes, it must. Technically, the 14,000-ton Tower is in the process of falling, only very slowly.

A few years ago, it seemed like the Tower would finally come to blows with its shifting foundations. Fearing the worst, officials closed the site to the public in 1990 for renovations. More than a decade later, they reopened the destination for tourism, hoping their strengthening efforts had lengthened the Tower’s productive life. Today the world’s most iconic mistake leans on, despite all odds.

What Does A Civil Engineer Do?

What Celebrity That Has Most Wishes Granted In Make A Wish Foundation?

Why Is the Ocean Salty?

How Much Do Project Managers Make?
Previous Post: « Are Homophobes Secretly Attracted To The Same-Sex?
Next Post: Why Does Swiss Cheese Have Holes? »