As the early morning sun rises from the horizon, for more than a century, families nationwide have depended on the deliciousness of Aunt Jemima pancake mix and the drizzling sweetness of syrup to start their day off right. Although Aunt Jemima is often thought of as a mythological corporate model in American folklore, it turns out that the amiable face associated with the fluffiest pancake mix on supermarket shelves was actually real person, a lady named Nancy Green. 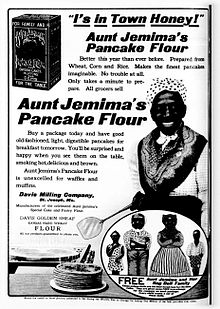 While the world has known and loved her as Aunt Jemima, her given name was Nancy Green. Born in Montgomery County, Kentucky on November 17, 1834, Nancy Green grew up as a slave and worked as a laundress during her childhood. Unbeknownst to her in her younger days, her latter life was destined for the spotlight and becoming the world’s first living trademark.

When Chris Rutt and Charles Underwood purchased the Pearl Milling Company, they sparked the original idea of developing a packaged self-rising pancake flour mix for distribution. However, the business was highly competitive and the partners were is desperate need of finding an image to make the product more successful. In 1889, Chris Rutt of the St. Joseph Gazette attended a minstrel show and heard an upbeat, catchy tune called “Aunt Jemima.” Inspired by the blackface performer wearing an apron and bandanna, Rutt decided that the perfect name for their pancake mix was Aunt Jemima. Despite their spark of genius, Rutt and Underwood lacked the proper funding to get the company running and ended up selling the recipe to R.T. Davis Milling Company in 1890.

As soon as they received the prized formula, the R.T. Davis Milling Company began a nationwide search for a black woman to promote their product and serve as a trademark for the Aunt Jemima brand. By some twist of fate, Davis discovered 56-year-old Nancy Green in Chicago and hired her as the first black corporate model in the history of the United States. In 1893, Aunt Jemima Pancake Mix was officially launched at the World’s Columbia Exposition and Nancy Green made her debut as its Mammy archetype. America instantly fell in love with Green as Aunt Jemima for her warm, friendly personality, excellent storytelling, and exceptional cooking talents. In fact, the exhibition booth for Aunt Jemima attracted so many spectators that policemen were assigned for crowd control.

Within days, the R.T. Davis Milling Company received more than 50,000 orders to distribute the Aunt Jemima Pancake Mix from coast to coast. From the thriving showing of the mix, Nancy Green was also awarded a certificate and medals from the officials of the exposition, which was a unique accomplishment at the time for a black woman. Considered the newly crowned “Pancake Queen,” she was then given a lifetime contract with R.T. Davis Milling Company to represent the Aunt Jemima brand name. As a vital component of the promotional push by the company, Nancy Green appeared as Aunt Jemima more than 1,000 times across the nation and solely responsible for the spikes in pancake flour sales.

Since Green was able to make a pretty penny from being involved in the advertising of a superior product on the market, she focused the latter part of her life on fighting against poverty within the black community. Unfortunately, Nancy Green was hit by an automobile while crossing a Chicago street and died from her injuries on September 23, 1923. A few years later in 1925, the Davis Company also encountered some severe financial issues and sold the Aunt Jemima name to the Quaker Oats Company. Although Nancy Green’s life was cut short, her inspiration for Aunt Jemima still lives on to this day and will be forever remembered on the breakfast table of families for years to come.

What Do Real Estate Agents Do?

How Much Do Real Estate Agents Make?

What Do Product Managers Do?

Best Shaving Cream: Great Products to Care Your Grooming
Previous Post: « What’s the Meaning of the Song “Hotel California” by the Eagles?
Next Post: What Are The Health Benefits of Chai Tea? »