Whether you are deeply spiritual or, by contrary, more grounded in the ‘physical’, mundane and materialistic world, you have probably heard about chakras. Equally curious, we are here to answer to ‘what are chakras?’ and discover more about this intriguing subject. Chakra is a term currently used in yoga, meditation and healing practices to refer to circles or centers of energy which align the spine, from the base to the head. Let’s find out more in the sections below.

Chakras are points of energy located in our subtle body (which coexists with our physical body). The term comes from the Sanskrit language, and it literally means ‘wheel’, ‘circle’, ‘cycle’ or ‘turning’.

The concept and meanings of chakra are rooted in Hindu traditions, but its symbolism also features in yogic and tantric practices of Buddhism. They are associates with different colors, body sites, crystals, and deities.

There are seven chakras connected to both our physical and psychological properties and functions. Below you will find a short description for each chakra, along with its name in Sanskrit, meaning, symbol, function, corresponding color, deity and associated verb/ action.

Meaning: Also called Base chakra, this is a chakra of matter (together with the next two chakras), representing our foundation and sense of being grounded. This chakra is about power.

Location: base of the spine (coccygeal region).

Function: The Root Chakra governs our instincts, sexuality and sense of stability and security.

Associated Verb/ Action: I am.

2. Splenic Chakra or Svadhishthana in Sanskrit (English: ‘one’s own base’)

Meaning: Also known as sacral chakra, this center of energy controls our connection with others. It is about creativity and exploration.

Symbol: white lotus with orange petals and a crescent moon within.

Location: around and slightly above the pelvis (lower abdomen).

Function: From a physical point of view, the Splenic chakra governs reproduction, being our sexual center. Psychologically, it is said to influence our creative expression and spiritual level. It also relates to enthusiasm and pleasure, referring to relations and basic needs.

Meaning: Also called Navel Chakra, the Solar Plexus Chakra refers to our ability to control our life and confidence level. It is about intellect and (self-) perception.

Function: Due to its location, the Solar Plexus Chakra is said to influence our digestive and metabolic system, and the way food is transformed into energy for the well-function of our body. The main mental aspects governed by this chakra are issues of personal awareness, assertion and power, confidence, fear, and expansiveness. Spiritually, it affects all matters of personal growth.

Associated Verb/ Action: I Do.

Meaning: The Heart Chakra is about love, affection and inner peace. As the fourth chakra, located between lower energy centers of matter and upper energy points of spirit, it connects both dimensions of reality. This chakra refers to the connection between body, mind, soul and spirit.

Function: The Heart chakra physically governs the immune system and level of stress. Emotionally, its meaning is related to emotions covering the spectrum of love: compassion, passion, devotion, tenderness, well-being. Once this chakra is open, the individual is able to feel unconditional love for himself or herself, and for others as well.

Meaning: The Throat Chakra, also called Vishuddhi, is about our ability to express ourselves. It regards the clarity of self-expression.

Symbol: a white circle woth a silver crescent within it, and 16 pale blue petals.

Function: The Throat chakra governs the aspect of communication and verbal expression. Physically, it affects the function of the thyroid, a gland producing the hormone responsible for growth. Spiritually, this chakra influences independence, security and personal development, while mentally refers to the fluency and clarity of our thoughts and our ability to express them.

Note: In Tibetan Buddhist theory, this chakra is associated with the red color and has a considerable role in the practice of lucid dreaming.

Meaning: Also called the Brow Chakra, the Third Eye Chakra is about insight and intuition. Both in Hinduism and Buddhism, it represents the unity between light and dark, male and female, and the end of duality between matter and spirit. It reflects deep levels of perception.

Function: The Third Eye Chakra is a superior chakra governing the inner guidance and peace. This energy point affects our spiritual openness and clarity of thoughts. Spiritually, it influences aspects of consciousness, dream state and vizionariness.

Meaning: The Crown chakra is the highest center of energy in our body and is all about spiritual connection, cosmic awareness and enlightenment.

Symbol: a lotus with one thousand petals

Location: top of the head.

Function: The Crown Chakra physically governs our central nervous system, while mentally leads to meditation practices, which play an essential role in the physical basis of emotional action and consciousness. This chakra helps acquire inner knowledge and wisdom in a state of pure bliss, as well as a sense of unity with universal energies.

What are Chakra Stones?

As mentioned above, each chakra has a corresponding body part, color, mythological deity and religious symbolism. In current spiritual practices, these are also associated with stones that carry healing powers. The chakra stones are actually crystals that help balancing our energies according to the meaning and function of each chakra. Here are a few crystals you could use for each energy center in your subtle body, from top to bottom: 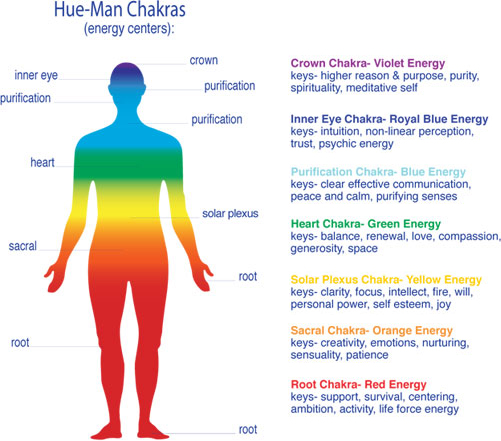 How Many Calories do I Need a Day?

What Is the Longest Word in the English Language?
Previous Post: « What is Sean Penn Net Worth?
Next Post: What is the Average Photographer Salary? »