One of the fiercest biological threats in the past few years, the Ebola virus affects humans and other primates. It spreads mostly through contact with infected bodily fluids, although fruit bats carry the virus in nature but are not affected by it. It has also been discovered that breast milk or semen of a recovering person can contain strains of the virus for months.

It tipically kills its victim after 6 to 16 days from the first symptoms of Ebola and approximately 50% of the people infected survive. Given this short time, scientists are yet to discover the exact timeline of the changes that take place in the body. 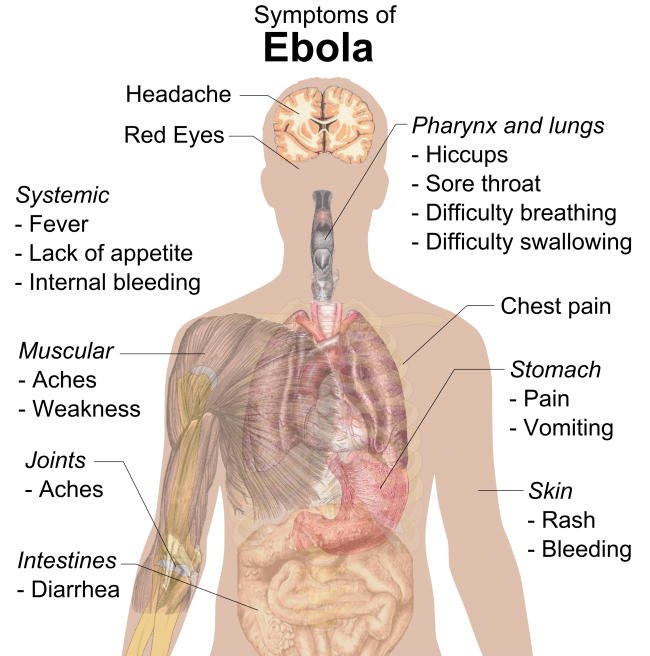 While it generally takes 2 to 21 days from exposure to the first symptoms, it has been recently discovered that approximately 5% of the victims might experience signs of infection after more than 22 days. As soon as it enters the body, the virus affects the immune system which is why the virus is so vicious and destructive. Once the immune system cannot fight it, the virus begins to replicate and spread throughout the body.

First signs of Ebola infection could be easily mistaken for influenza:

In most of the cases, the next stage is what makes the difference between a simple influenza and the Ebola virus:

After about 6 days, the virus reaches the soft tissues and organs. Because of this, there is a significant possibility of bleeding internally and externally:

Most deaths usually happen not because of the virus itself, but because of blood loss. After all, the virus’ purpose is to find a home and keep it. Death is painful and most of the people who don’t survive end up in a coma until the end of their life.

Ebolavirus is considered a category A bioterrorism agent by CDCP and a biosafety level 4 agent. Although there have been studies about using it in a biological war, it turned out that for now this might be difficult considering that it becomes ineffective extremely quickly in open air.

In humans, the virus first attacks and disables the immune system, and starts replicating very quickly. At the same time, it attacks the endothelial cells found on the inside of blood vessels. The virus uses the broken immune system to travel to the lymph nodes, where it further reproducts. It can now easily enter the bloodstream and spread. Next, it affects the soft tissue of organs, and then the muscles. The replication process causes a septic state by triggering the release of inflammatory chemical agents.

First cells to be affected by the virus are macrophages, in charge of “eating” viruses or other microscopic intruders. The infection causes a programmed death among these and white cells in the blood, which further weakens the infected organism and its immune response.

The endothelial cells are usually affected by the symptoms of Ebola after about 3 days from infection, followed by liver damage and improper clotting of blood.

For those who manage to survive the virus, the recovery is tough. Unfortunately, the virus leaves permanent damage to soft tissues which leads to these permanent or semi-permanent symptoms of Ebola:

The virus can and, in most cases, will stay in some body areas after the infection has been treated. These include eyes, breasts and testicles. Thus, it is possible (but quite unlikely) for Ebola to be sexually transmitted.

There are a few experimental treatments that undergo trials at the moment. However, because of the speed at which the virus attacks and destroys the exposed organism, the treatment is mostly supportive:

There are certain situations where professional care is not an option. In this case, the patient will be moved by using chlorine-soaked towels. The sheets, hands, clothes or any other object that came to contact with the infected person must be thoroughly washed with bleach. The caregivers must also cover their face (especially mouth or nose) with a cloth, although it is advised to wear eye protection too. 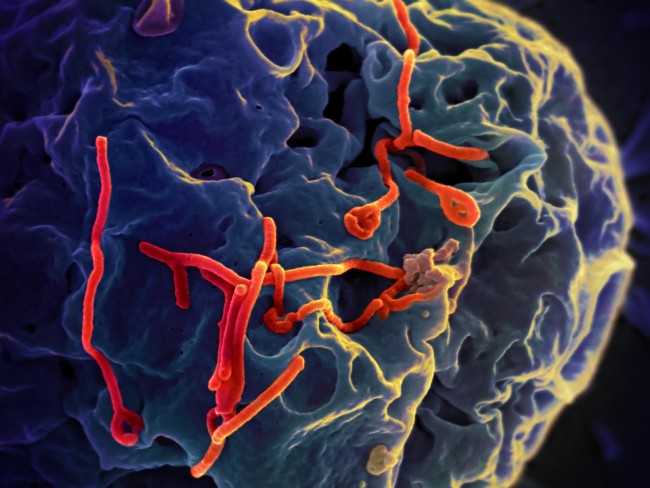 Primates are the group with the highest mortality, according to recent studies. It has been shown that 5000 gorillas lost their lives because of the virus. The chimpanzee population from the Lossi sanctuary registered an 88% drop because of this virus. They are even more susceptive to the outbreak because of their meat consumption.

As for domestic animals, it has been shown that pigs can carry the virus, although it is not yet known if the virus can be further transmitted to humans through meat consumption. In certain areas, dogs have shown seroprevalence without any sign of symptoms of Ebola.

One thing is certain: the Ebola virus is a dangerous pathogen that causes a painful and violent death or damages an organism for life. Although we still lack plenty of information about how it works and, more importantly, how it can be stopped, progress is made on a daily basis inside the virology labs that will hopefully help us defeat this biological threat once and for all.

My Cat is Sneezing A Lot, Is He Sick?
Previous Post: « What is Victoria Beckham Net Worth?
Next Post: What Do Ex Sports Stars Go On To Do? »