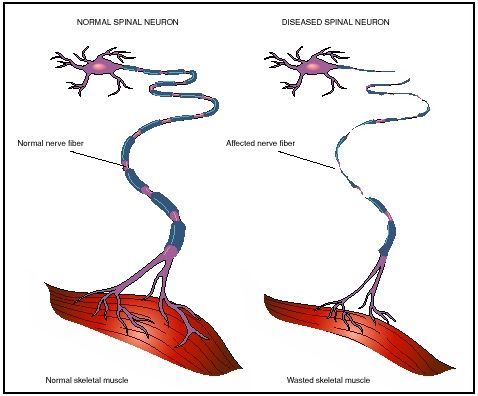 In this article we hope to answer the question “What is ALS disease and how does it affect people?”.

More commonly known as “Lou Gehrig’s Disease”, ALS stands for Amyotrophic Lateral Sclerosis. ALS is a disease that impacts nerves in the spinal cord and brain. Motor neurons make the connection between the brain and muscles. ALS damages this connection which eventually kills the motor neurons. When the neurons die, the brain can no longer control the muscles. Patients who suffer of ALS and are in the later stages may grow to be completely paralyzed.

The word “amyotrophic” has its origins in the Greek language. “A” means no, “Myo” means muscle and “Trophic” stands for nourishment. When the nourishments is lost within muscles, the muscle becomes useless and it becomes atrophied. The word “lateral” refers to the zones in the spinal cord where cells that control muscles are found. As that zone becomes damaged it leads to “sclerosis”.

Motor neurons that are damaged will no longer give impulses to muscles. It’s these kinds of impulses that make the muscles move. Symptoms of ALS include weakness of the muscles, particularly in the legs and arms and difficulty in breathing, swallowing and speech. Muscles that no longer receive any signals from neurons will start to atrophy. The limbs of the patient start to slim down as the muscles become more and more atrophied.

The initial symptoms may be overlooked as the disease starts off slowly. The zones of the body first affected by the ALS are entirely dependent on where the disease starts harming the neurons in the first stages. Around 75% of all people who are affected by the disease have the first symptoms in the legs and arms. Patients who encounter the symptoms in their legs may experience an odd sensation when running or walking. The people suffering from the disease may stumble or trip during the first stages of the disease. The people who experience the first symptoms in their arms may have difficulties in tasks such as writing or buttoning a shirt. Around 25% of people suffering from ALS encounter bulbar ALS. This means that those people have trouble swallowing or speaking. Their speech may become quieter, nasal or slurred. Some other symptoms include loss of mobility of the tongue and difficulty swallowing.

Over the time, patients will encounter issues when swallowing, moving and speaking. Other symptoms include stiff and tight muscles and magnified reflexes, including an exaggerated gag reflex.

Even though the rate and order of the symptoms are different from one person to another, most of the patients eventually lose the ability to walk or the use of their arms and hands. Most people also lose their ability to swallow food or speak and end up having to use a portable ventilator (BiPAP). The disease eventually moves in other parts of the body and starts to atrophy other muscles, regardless of where the early stages of the disease occur.

In late stages of the ALS, the nerve that controls movements of the eyes can be impacted. In the final stages of the disease, the condition of the patient may appear like the locked in syndrome.

There is no real certainty of what causes the disease. Around 5 to 10% of cases are because of genetics. The people who suffer from ALS inherit the disease from the parents. A flaw in the chromosome 21 is linked to around 20% of familial ALS cases and 2% cases of ALS in total.

90% of ALS cases are not associated with any presence of the disease in the patient’s family. In these kinds of cases the cause of the disease is unknown. Some potential causes may be frequent drug use, military service, head trauma and contact sports. Some recent study claim there is a link between the ALS disease and food that has been contaminated by the blue green algae.

Another cause of the ALS disease is an injury in the motor system in zones like the frontotemporal lobes. Injuries in those areas show more often than not signs of deficit, which can predict the loss of mobility and will result in the spread of the ALS disease.

Other potential causes include occupation, electric shocks, exposure to electromagnetic fields and chemicals. These kinds of causes have no consistent findings even though they have been analyzed.

There is currently no test that can definitely reveal the presence of the ALS disease, although the early symptoms can suggest the disease.

Treatment is very ambiguous for this disease. While there are certain medications that have proved to be a little efficient in the disease (such as Riluzole), most of the medication available on the market only address the symptoms of the disease and do not cure it completely.

Is Horse Riding a Good Way to Boost Fitness Levels?

What Are The Health Benefits Of Peppermint Tea?
Previous Post: « What Causes Kidney Stones?
Next Post: How much is Jay Z Worth? Jay Z Net Worth Information »