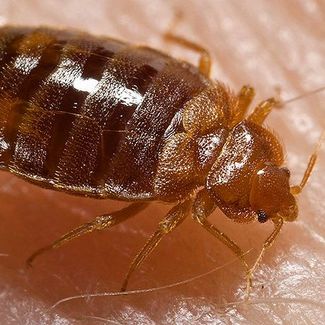 The cockroach-esque Cimex lectularius leaves the detritus of the parasite’s life: eggs, fecal stains, shed shells—the telltale scent of coriander when a horde of them is disturbed.

Pinhead-sized, rust-colored and flat, the common bed bug fattens up like a swollen apple seed once it’s feasted on your blood supply for just a few minutes. Each bug can consume up to six times the volume of its body. Thankfully, despite their bloody consumption habits, these ectoparasites aren’t known to spread disease.

Hated Hemipterans
As tiny nymphs, young bed bugs roost for the long haul, living out their life cycles not just in people’s mattresses, but in bookcases, electrical wiring, clock radios—you name it. Both nymphs and adult bed bugs alike crave the blood of sleeping humans, hence their moniker.

Bed bugs know when you’re asleep or awake, by tracking your breath via the carbon dioxide you exhale. They can even detect when you’re in your deepest REM sleep. When they bite, they inject their anesthetic saliva into the wound so the pain doesn’t startle you awake. Worst of all, they can hang out for a year at a time without feeding at all.

Ectoparasites in History
Bed bugs are at least as old as human civilization. They are one of the oldest household pests, in fact, known to infest ancient Egyptians’ woven mats some 3,300 years ago. During the Middle Ages, it was common to send an unlucky pig into rooms at inns to let the bugs feed on it first.

Bed bugs came to America on the ships of the earliest English colonists, nesting inside bunks stuffed with reeds and leaves. By the 1700s, communities were badly infested. In some cities, as many as one-third of all residences were swamped with the hated ‘red coates.’

But then came the era of the pesticide. DDT and other chemicals virtually eliminated bed bugs from the developed world in the mid-twentieth century. A single spray kept the chinches away for a year. They became so scarce, entomologists couldn’t even find specimens to examine in the lab.

Reinfestation
But bed bugs have been back in the news in recent years. Why? Alongside antibiotics and penicillin, we are witnessing a worrying growth of resistance to the chemical pesticides used to suppress infestations in the modern era.

As new generations of bugs get better at surviving conventional pesticides, swarms of them are reappearing in cities across America. More persistent than ever, they are once again considered something like the Plague in New York City. Meanwhile, Chicago is awash in bugs, and Cincinnati has its own task force to tackle the invasive pests.

A Natural Remedy
What can you do to keep the bed bugs at bay? A natural remedy was suggested by the Smithsonian: kidney bean leaves. Before pesticides, people would scatter kidney bean leaves around their bed before going to sleep. Overnight, the bugs would crawl on the sticky leaves and get stuck. In the morning, the leaves are burned.

Why Do We Hiccup?

What are the Health Benefits of Cherries?
Previous Post: « What Does A Speech Pathologist Do?
Next Post: Do Penguins Have Feathers? »