Once considered the largest library in the world (and perhaps in history), the Great Library of Alexandra was home to various works by all of the greatest writers and minds of antiquity, such as Socrates, Homer, Aristotle, and Plato.

First founded by the Ptolemy dynasty in 290 BC, the Great Library was located in the palace district known as Brucheion in northern ancient Egypt. At the time, Alexandria was the largest city in the western world, the center of the papyrus producing industry, and the hub for the trade of books. Although it is unclear the exact dimensions or content of the library, some archeologists estimate that there was 600,000 scrolls housed within its walls. The library flourished for centuries with grammarians, physicians, mathematicians, historians, poets, astronomers, and geographers on staff to make the Great Library of Alexandria the heart of cultural and intellectual development in the ancient world. 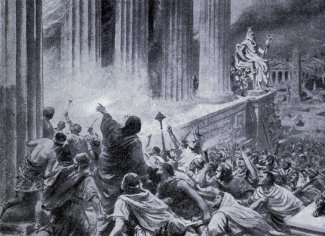 So, how did all of the intellectual and cultural power of the Great Library of Alexandria come to its tragic demise? Well, the truth is that historians are unsure of what exactly happened to the library and can prove very little about the library’s history. Many archeologists have been frustrated by the mystery surrounding the library, a mystery perpetuated by the total lack of architectural remains –  shocking for what was such an imposing structure.

While the lack of physical archaeological finds has encouraged some historians to wonder if the library even existed, others have taken advantage of the opportunity to propose some creative potential scenarios. The three major suspects in questioning for the destruction of the monumental library remain Julius Caesar, Caliph Omar, and Bishop Theophilus.

Who Was The Culprit?

Despite popular belief, historians indicate that there was no immense fire 2,000 years ago that caused the loss of the great library’s voluminous works. Although it has been falsely claimed as the greatest catastrophe in the ancient world, it is possible that the infamous fire did not happen on such a grand scale. Instead, new evidences suggests that the destruction and demise occured gradually over a period of centuries, with several documented fires over the span of hundreds of years.

In 89 BC, large regions of Alexandria were burned to the ground as Egypt was torn into a civil battle under Ptolemy VIII. With the next fire in 47 BC, Julius Caesar and his Roman soldiers invaded ancient Egypt and burned the harbor, along with an estimated 40,000 books. Since the Greek geographer Strabo mentioned the library in some of his writings well after this time, it is unlikely that the library was wholly destroyed during this debacle.

Nearly 300 years later in 273 AD, Roman Emperor Aurelian conquered Egypt and burned a percentage of Alexandria, including the Brucheion district that housed the Great Library. Fearing the pagan temples within Egypt, Bishop Theophilus of Alexandria demanded that a mob of Egyptians destroy the temple at Serapis and burn down all of the pagan books that were stored within the daughter library. Finally, a last fire is documented to have blazed through Alexandria in 645 AD when the Muslim Caliph Omar invaded the Egyptian land. It is rumored that Omar wanted to destroy all of the library’s books because they were not consistent with the Muslim Koran, so the soldiers used the scrolls to fuel the hot water for their baths.

For centuries since its destruction as a true wonder of the ancient world, the tragic loss has been significantly lamented by poets, scholars, historians, and even tourists. Although we may never know with 100% certainty who or what dealt the final blow to the great library’s intellectual treasures, nothing will bring back the great tragedy that was the demise of the Great Library of Alexandria. A great portion of ancient history, learning, and literature was lost forever.

What Does A Librarian Do?

Where Do Bed Bugs Come From?
Previous Post: « What is Diplomatic Immunity and Who Gets It?
Next Post: Has Anyone Actually Broken Out of Jail Using a File Baked in a Cake? »