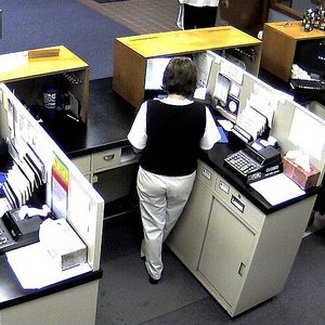 Bank tellers are responsible for the accurate processing of transactions, including cashing checks, making deposits, collecting loan payments, and preparing specialized types of funds. Tellers are considered to be the front-line staff of all banking institutions, which means the job description also includes answering questions from customers, counting cash, and keeping detailed records of all transactions electronically. Not only does the profession require expertise in accounting and finances, but also solid communication and personal interface skills.

Salary
How much does a bank teller make? According to the May 2012 records from the Bureau of Labor Statistics, the 541,770 full-time bank tellers employed nationwide earned a mean annual salary of $25,790, or a mean hourly wage of $12.40. The bottom ten percent earned as little as $19,630, while the top ten percent brought home as much as $34,320 annually. Part-time bank tellers earned the same average hourly wages, with the lowest tenth percentile earning an average of $9.10 and the highest making $15.70 an hour. However, part-time tellers only work from a minimum of one hour up to 34 hours each week, earning between $12.00 and $408.00 weekly.

The majority of tellers, around 90 percent, worked for depository banks and earned an annual income slightly higher than average at $25,830. State governments were the top paying industry for this profession, with tellers making an annual salary of $40,420. Additional statistics found that the highest-paying bank tellers were from Alaska at a median annual salary of $29,290, with Massachusetts coming in at a close second at $28,371 annually. Within the right industry and location, a career as a bank teller can be quite lucrative for support administrative professions.

Work Environment
The majority of bank tellers find employment in bank branches, where they sit or stand at a computer station and interact with customers to fulfill all transaction requests. Most tellers work full-time schedules of eight hour shifts, following the typical Monday through Friday work week. On the other hand, some tellers work shorter bank hours on Saturday as well. An estimated 27 percent of bank tellers work part-time schedules, which is higher than the average for other similar professions. Due to advancements in technology, mobile and online banking have somewhat lowered the demand for full-time tellers. Employment for bank tellers is expected to experience very little (1 percent) or no growth between 2010 and 2020.

How Much Does A Phlebotomist Make?

How Much Do Construction Workers Make?
Previous Post: « How Much Do Nurses Make? + Infographic
Next Post: How Much Do Real Estate Agents Make? »