Home Jobs & Education How Much Do Security Guards Make? 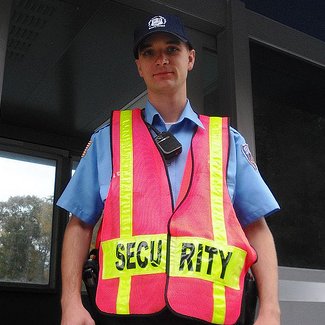 Security guards patrol buildings and monitor people to prevent the occurrence of crime, including fire, vandalism, theft, terrorism, and other illegal activities.

Other specialized security guards are employed by the government to serve as transportation security screeners in terminals for air, sea, and rail transportation facilities. Since security guards need to provide surveillance or protect around the clock, most work rotating eight-hour or longer shifts for full-time status.

Salary
How much does a salary guard make? According to the Bureau of Labor Statistics May 2012 records, the 1,046,420 security guards employed throughout the United States earn an average yearly security guard salary of $27,240, or a mean hourly wage of $13.10.

The bottom ten percent in the profession makes a mean $17,390 each year or less, the top ten percent of security guards bring home an average of $42,490+ annually. Security guards employed in investigation and security services earn slightly less than average at $25,340, but those that work for banks and monetary authorities make considerably more at an annual average salary of $38,570. The top-paying states for the field are the District of Columbia and Alaska, where security guards earn $37,010 and $36,610 each year respectively.

Job Outlook
As concerns for crime, terrorism, and vandalism continue to escalate, there will be growing demand for various forms of security to protect both people and their property. Therefore, employment for security guards is expected to grow about as fast as the national average for all occupations at a rate of 19 percent, which will create 195,000 new jobs before 2020. The most promising job prospects will be in the private sector as security firms will continue to take over some of the duties that law enforcement officers used to be responsible for.

How Much Do Project Managers Make?

Respiratory therapists (RTs) are trained and legally regulated healthcare professionals who are educated to at least the associate's level. How long...