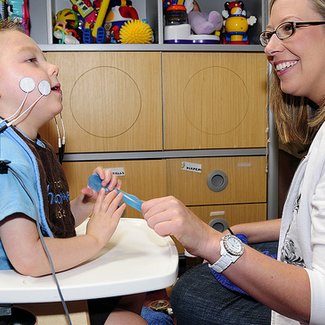 Speech pathologists are typically responsible for evaluating patients’ levels of speech difficulty, determining the extensive of the communication problems, carrying out individualized treatment plans, teaching alternative communication methods, and working with patients directly to increase their ability to speak correctly.

While the bottom ten percent in the field earned $44,380 or less, the top ten percent of speech pathologists break the six-figure salary mark with a mean salary of $107,650+ annually. Speech pathologists employed at elementary and secondary schools earn slightly less than average at $66,440, but those that work in home healthcare services bring home considerably more at $91,220 each year. The top-paying states for the profession are District of Columbia and New Jersey, where speech pathologists earn an average of $86,220 and $84,660 respectively.

Work Environment
The majority of speech pathologists, around 44 percent, are employed in public and private elementary and secondary school settings. Others have found employment in physician offices, occupational or speech therapy centers, hospitals, nursing care facilities, and home healthcare services. Nearly all speech pathologists are scheduled on a full-time basis during normal business hours, though some who are employed on a contract basis work part-time hours. Although most work within one setting, some are required to spend a large amount of their workday traveling between healthcare facilities or patients’ homes.

Job Outlook
With the large baby boomer population continuing to grow older, there will be increased demand for healthcare providers to treat conditions that cause speech or language impairments, including strokes and hearing loss. Increased awareness of language disorders in younger children is also predicted to drive a higher need for more speech pathologists to treat the youth age group. Therefore, employment is expected to grow much faster than the average for all other professions at a rate of 23 percent, which will create 28,800 jobs for speech pathologists before 2020.

How Much Do Administrative Assistants Make?