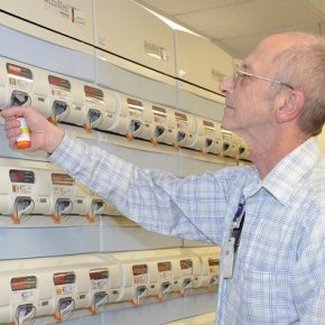 Pharmacy technicians assist licensed pharmacists by receiving vital information from patients or other health professionals necessary for prescriptions to be accurately filled.

Salary
How much do pharmacy techs make? According to the May 2012 records from the Bureau of Labor Statistics, the mean annual pharmacy tech salary is $30,430, which is equivalent to a $14.63 mean hourly wage for the profession. Percentile wage estimates indicate that the lowest ten percent earn an average of just $20,580, while the top ten percent pharmacy technician salaries is $42,400.

The annual salary of a pharmacy technician highly depends on the industry through which they are employed. For instance, technicians employed in pharmacy and drug stores earn $28,940, while those that work within general medical or surgical hospitals make an average salary of $34,410. The highest-paying industries for this occupation are the federal government at $40,650 and outpatient care centers at $38,750 per year.

Furthermore, there are some states that stand out among the others as being the top-paying regions for pharmacy technicians. Those employed in the District of Columbia earn the top annual salary of $40,560. Pharmacy technicians also earn more than average in Washington at $39,630, Alaska at $39,520, and California at $39,150. Depending on the industry and state of employment, pharmacy technicians can earn more lucrative salaries above the average.

Work Environment
Pharmacy technicians hold around 353,340 jobs in the United States, with 54 percent of these forms of employment being within a pharmacy or drug store. Technicians are also employed at state, local, or private hospitals, supermarkets, department stores, and other general stores that have pharmacy departments. Since pharmacies may be open throughout the overnight hours, some pharmacy technicians may have to work night and weekend shifts. Most technicians are on their feet working full-time, while many others do work part-time schedules.

Job prospects are currently excellent for pharmacy technicians in most work environments, especially those that have completed formal training or have gained extensive experience. Employment for pharmacy technicians is predicted to grow much faster than average at a rate of 32 percent between 2010 and 2020. This comes as the result of advances in research, an aging baby boomer population, and increased use of prescription medications.

How Long Does It Take To Become A Pharmacy Tech? + Infographic

What Does A Pharmacy Technician Do?

How Long Does It Take To Become A Vet Tech?