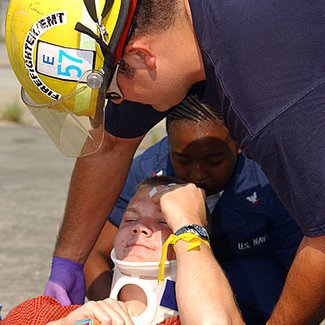 Emergency medical technicians (EMTs) are often the first responders on the scene of an emergency to provide first aid care for the sick or injured individuals and transport to a medical facility.

EMTs are typically responsible for responding to 911 calls for emergency medical assistance, assessing patients’ conditions to determine course of action, using backboards or restraints to keep patients still during transport, reporting their observations to medical professionals, documenting medical care provided to patient, and cleaning equipment after use.

Salary
How much do EMTs make? According to the May 2012 records from the U.S. Bureau of Labor Statistics, the 232,860 emergency medical technicians employed in the United States earn an annual average EMT salary of $34,370, which translates to a mean hourly wage of $16.53.

While the bottom ten percent in the profession earned $20,180 or less, the top ten percent of EMTs make an average yearly wage of $53,550. EMTs employed with ambulatory healthcare services bring home considerably less than the average at $31,140, but those who work for the local government earn a higher salary of $39,300. The top-paying states for the occupation are currently the District of Columbia and Alaska, where EMTs earn an average of $52,930 and $51,570 each year respectively.

Work Environment
The majority of EMTs, around 48 percent, are employed by ambulance services as ground transportation to area hospitals. Others are employed by state, local, or private hospitals as well as the local government. Most emergency medical technicians are employed full-time, but about one-third report working more than full-time hours for overtime on overnight and weekends to provide round the clock patient care.

The majority of career EMTs are employed in metropolitan areas because smaller cities and rural towns are more likely to have volunteer responders with varied schedules.

Job Outlook
With the large baby boomer population growing older, there has been a noticeable increase in the number of age-related health emergencies, including heart attacks and strokes. As a result, there will be increased demand for EMTs to perform first aid care and transfer patients to various treatment facilities. Employment for emergency medical technicians is predicted to rise much faster than the national average for other professions at a rapid rate of 33 percent between 2010 and 2020, especially in metropolitan areas.

How Much Does a Pharmacy Tech Make?

How Much Do Registered Nurses Make?
Previous Post: « How Much Do Ultrasound Technicians Make?
Next Post: How Much Do Athletic Trainers Make? »