Marine biologists study life in the sea. They are experts on the biological organisms and behaviors that occur in non-freshwater ecologies. The entry-level degree for a marine biologist is the bachelor’s, but serious marine scientists need to get a graduate degree from one of the many accredited colleges for Marine Biology in the U.S.

There’s no specific body that accredits Marine Biology programs, but schools should have appropriate, usually regional accreditation approved by the Department of Education. Here is a curated list of the best Marine Biology colleges in America based on the caliber of offerings, facilities and research opportunities for budding marine scientists. 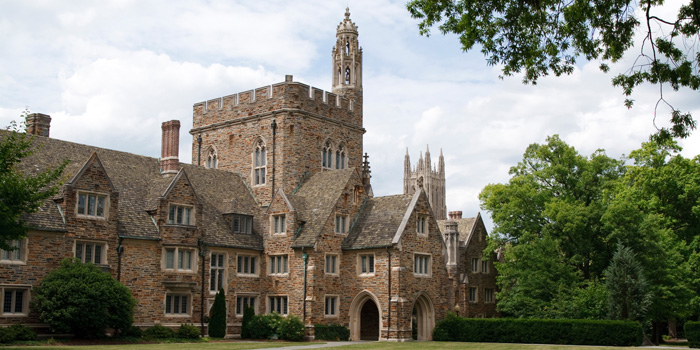 The Department of Marine Science and Conservation at Duke University is part of the prestigious Nicholas School of the Environment, housed in the Levine Science Research Center on the massive, 8,000-acre Durham campus. Duke is particularly strong in undergraduate research, offering a B.S. in Biology — Marine Biology, a B.S. in Environmental Sciences — Marine Ecosystems, and a B.S. or B.A. in Earth & Ocean Sciences. There are two Ph.D.s: Marine Biology and Marine Conservation Biology & Policy. Most faculty are residents at the famed Duke University Marine Laboratory in Beaufort, North Carolina. In recent years, just six offers of doctoral admission have been extended per enrollment season, for a selective rate of 12 percent.

The Boston University Marine Program, or ‘BUMP,’ in the Department of Biology is a top-tier East Coast choice for academics and fieldwork at the undergraduate level. Boston University, a leading private school with an attractive international reputation, offers BUMP as a multidisciplinary rather than standalone program. BUMP students get intensive hands-on experience as part of the required Marine Semester — described by one student as “two soaked and salty semesters of seafaring bliss and lobster.” Boston offers a B.A. in Marine Science, with chances to study at the historic Woods Hole Oceanographic Institute and the whale feeding grounds at Stellwagen Bank National Marine Sanctuary. There are many study abroad opportunities.

The University of Miami’s Rosenstiel School of Marine and Atmospheric Science is based in Coral Gables, Florida, near the Everglades, Florida Keys and Gulf Coast. With one of the largest marine science graduate programs in the country with over 250 students, Rosenstiel has a striking number of facilities for aspiring marine biologists, like the National Center for Coral Reef Research. Numerous Masters and Ph.D.s are available in Applied Marine Physics, Marine & Atmospheric Chemistry, and more. There are undergraduate degrees in Marine Science, Meteorology, and Marine Affairs, covering applications from research and conservation to policy and business. Stipends, fellowships and other financial aid are available for most graduate students at Miami.

A private, Ivy League institution on the West Coast, Stanford University is a great school overall, but it is particularly known for its strong marine biology curriculum, which is offered as a Specialized Field of Study in the Department of Biology. B.S. and M.S. degrees are available. Students work at the historic Hopkins Marine Station, a ground-breaking research and teaching facility 90 miles south of the main campus in coastal Pacific Grove. The Station has opportunities to conduct independent research for class credit, get published, and build honors projects. Graduate students and undergraduate upperclassmen can collaborate with faculty on fieldwork in Monterey Bay, Baja, the Sea of Cortez and the South Pacific.

5. University of California at San Diego

The University of California at San Diego (UCSD) is an excellent Pacific-coast destination for marine biology students with a wide variety of interests. Here, Marine Biology majors work under the aegis of the world-famous Scripps Institution of Oceanography in the coastal Southern California city of La Jolla. Scripps is known internationally for its expeditionary research leading to discoveries in areas like algae biofuels and ocean carbon cycling. Facilities include the cutting-edge Marine Biology Research Division and Birch Aquarium. Students can take advantage of the Scripps Undergraduate Research Fellowship (SURF). UCSD offers a B.S., M.S. and Ph.D.s in Marine Biology.

6. University of Hawaii at Manoa

The flagship school in the public University of Hawaii system, Honolulu-based UH Manoa on OÊ»ahu provides the opportunity to study in one of the most beautiful and biodiverse marine regions on the planet. In the School of Ocean and Earth Science and Technology, students enjoy a special emphasis on tropical and sub-tropical ocean lifeforms and integrated mountain-to-sea science. Marine Biology majors get access to the Hawai‘i Institute of Marine Biology on Coconut Island and the Pacific Biomedical Research Center with its historic Kewalo Marine Laboratory and Békésy Laboratory of Neurobiology. UH offers a B.S. in Marine Biology and M.S. in Marine Science.

7. University of Maine at Orono

The University of Maine’s School of Marine Sciences is one of America’s largest marine units. With more than $10 million in annual research funds, the private UMaine is a top choice for aspiring marine biologists, offering a B.S. in Marine Science with concentrations in Marine Biology, Physical Marine Science, or Aquaculture; and an M.S. or Ph.D. in Oceanography & Marine Biology. Popular features include the Semester-by-the-Sea, which offers the chance to live and study at the coastal Darling Marine Center. The Center hosts research in areas like bivalve aquaculture and seawater systems. UMaine’s faculty are well-connected to the reputable Gulf of Maine Research Institute.

9. University of California at Santa Barbara

The University of Santa Barbara (UCSB) in Southern California is a public university with a reputation for pioneering research, from the undergraduate to the graduate level. Biology at UCSB includes the Department of Ecology, Evolution and Marine Biology, with a B.S. in Aquatic Biology — one of the nation’s few — with a concentration in Marine Biology. Graduate degrees include the M.A. and Ph.D. UCSB has the REEF (Research Experience and Education Facility), with its prolific ‘touch tanks’ filled with hundreds of unique marine species. There are 25 to 30 faculty research groups at UC Santa Barbara, assessing diverse areas such as parasite energetics and climate change.

The University of Washington, located in Seattle by the Puget Sound, is another public research university on the West Coast. Known for its high-impact translational research, UW’s School of Oceanography has undergraduate and graduate studies in Oceanography, Aquatic & Fishery Sciences, and Biology. There is no Marine Biology major per se; students major in one of the above to prepare for a career in marine science. The University hosts Friday Harbor Laboratories, a 484-acre biological preserve on San Juan Island where undergrad and grad students undertake research in areas like marine genomics and deep-sea biodiversity and participate in valuable supervised apprenticeships.

What Are The Top Biochemistry Schools In The U.S.?

What Are The Top Economics Schools In The U.S.?

What Are The Top Computer Science Schools In The U.S.?

What Are The Top Chemical Engineering Schools In The U.S.?

What Are The Top Biomedical Engineering Schools In The U.S.?

What Are The Top Mechanical Engineering Schools In The U.S.?

What Are The Top Aerospace Engineering Schools In The U.S.?

What Are The Top Petroleum Engineering Schools In The U.S.?

What Are The Top Journalism Schools In The U.S.?

What Are The Top Architecture Schools In The U.S.?
Previous Post: « Can Being A Selfish Narcissist Produce Better Decision-Making Behavior?
Next Post: Since Teflon is non-stick, how do they make it stick to the pan? »