When Forbes claimed several years ago that court reporters are the sixth best-paid people who don’t need a four-year degree, everyone was left wondering what does a court reporter do?

Also known as court stenographers, court reporters are in charge with transcribing spoken communications into written form. To do this, court reporters will employ a machine shorthand to create official transcripts of official proceedings.

A few seasoned court reporters that work in favorable areas are able to earn as much as $90,000 per year. Aspiring court reporters will have to attend either vocational training or technical school that will prepare them for the exact requirements for the job. 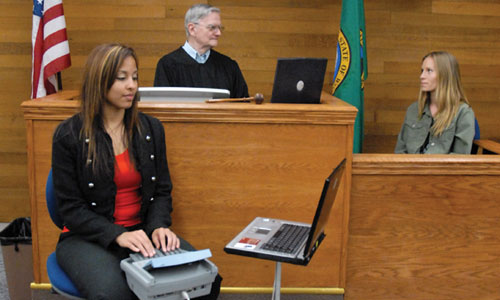 What do court reporters do?

As an official of the court, a court reporter is in charge with writing down transcripts. These will record the oral communications that take place within court proceedings. The resulted transcripts play an important role since they serve as official records that cover all the trial’s aspects. Other lawyers are enabled to search the transcripts after the verdict for the trial comes in.

The vast majority of court reporters will employ a stenotype machine comprising a typed shorthand. This allows court reporters to instantly reproduce the spoken communications in court. A few courts give permission for the communication to be recorded. In this case, the court reporter has to produce written transcripts of the recordings.

Most jurisdictions out there opt for stenotype operators. The sophisticated machine requires formal instruction and hundreds of practice hours. This is where the skill and fast pace of the court reporter come in handy. While listening, court reporters need to accurately type everything and are allowed to linger behind the spoken communication only by a few seconds.

What tasks does a court reporter perform?

Working as a court reporter involves more than writing down oral communications instantaneously. Preparing for the job will involve getting acquainted with legal processes in order to be competent to carry out the following tasks:

There have been debates on whether this profession that has been needed for years will survive in the newly digitized era. The more optimistic outlook strongly believes court reporters have a future, with statistics backing up the claim and pointing out towards a growth in demand in the following five years by 14%.

Court reporting is not for everyone. When choosing to become a  stenographer, you need to know more than just what does a court reporter do? Besides having a keen eye for details and being dedicated to a job that is mandatorily error-free, you should also consider the following pros and cons.

What do court reporters do in a day?

It’s difficult to describe the average day of a court reporter. Their work days vary according to the type of assignments they have to perform. For example, mornings could be taken up by pre-trial depositions and followed up by checking the transcripts, which can take up to four hours. Then, court reporters might have to attend a couple of trials.

Some court reporters will use the free time when they don’t have to attend trials to do freelance work. This might involve transcribing television programs or press conferences in order to send them to viewers almost in real time.

What does a court reporter do in a day will also depend on the experience level, on the geographic location and on the ability of the person to take on extra shifts or extra work

What Are The Top Journalism Schools In The U.S.?

What Does A Medical Transcriptionist Do?

How Long Does It Take To Become A Pharmacist? + Infographic
Previous Post: « Is It Safe to Eat out after the Chipotle E Coli Outbreak?
Next Post: What Is the Average Medical Transcriptionist Salary? »