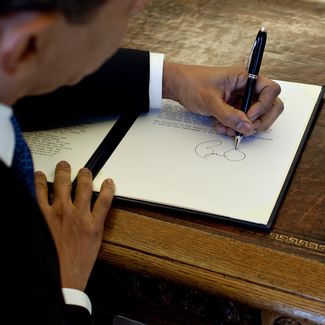 Handedness is defined as the hand an individual normally uses to complete tasks. The world is a right-handed place to live. From a practical standpoint, many tasks are better suited for a person who writes with their right hand. Only about 10% of the world’s population is left-handed. This begs the question; Why are some people left handed?

The truth is that no one is 100% certain as to how a person ends up left-handed. At best, there are several theories that are worth considering, but again none can be held up as absolute proof. Here are some of the more prominent theories.

Genetics
Many scientists feel that genetics offers the most logical answer to the question above. The fact is there are basically two published genetic studies that contain evidence of handedness being determined by genetics. While both studies emphasize the existence of loci on genes that affect the probability of being left-handed, the main issue is that it is difficult to determine which loci are involved and it has been estimated that as many as 40 different loci may actually act to determine handedness. Despite the information provided in these studies, the scientific community is still leery of accepting the data as conclusive.

Social Evolution
At one time in the world’s history, left-handedness may have been more prominent. However, left-handed people we viewed as mentally ill or freakish. There was such a negative stigma about using the wrong hand that parents often forced their left-handed children to learn to use the right hand. Another theory involves items used on a daily basis. Through the years, there were many inventions of convenience that were discovered by people who were right-handed. They were essentially unable to visualize a left-handed person using their invention, so they neglected to address the differences. Scissors is a great example of the phenomenon. Scissors actually cut more efficiently with the right hand due to the angle of the blades. Left-handed people have struggled with this for decades until people began retooling the product specifically for use by left-handed people. The bottom line is that society made it so difficult for people to use their left hand that the number of people doing so dwindled.

Prenatal Care
There has been significant work done regarding the effects of ultrasound, fetal positioning and fertility drugs on influencing handedness during prenatal development. Some fertility drugs and ultrasound are believed to adversely affect the development of the brain in fetuses. Studies have shown that some of these effects relate to the suppression of right-handed motor skills causing the child to have an overdeveloped left-handed capability. The fetal positioning during the last trimester is believed to sometimes cause brain damage to the same area of the brain as the ultrasound and fertility drugs. All three of these factors were prevalent in studies of babies born with some brain deficiencies while displaying a tendency towards being left-handed.

There are many other theories and sub-theories as to why people are left-handed. All the information as a whole leads to the conclusion that no one knows for sure. As a society, we can accept that being left-handed is unusual, but it is not at all freakish or as a result of mental illness. This is supported by the fact that many intelligent, successful people are or were left-handed.

What Does An Electrical Engineer Do?

Why Do We Hiccup?

What Happens When you Die? Afterlife in Different Cultures
Previous Post: « Why Do Cats Purr?
Next Post: What is the Highest Credit Score Possible? »