The Day of the Dead celebrated all across the South American continent, and in various parts of the United States as well, thanks to their large Hispanic communities, may seem a bit ghastly to outsiders. Sure, the Western world (well, the United States to be more precise – especially in the Los Angeles area) has Halloween as well, but nowadays this holiday has transformed more into a chance to wear sexy costumes than into a spooky celebration. To understand this celebration better, let’s take a deeper look into the history of its pagan roots, beyond the skull tattoos or creepy skull makeup and costumes.

The Aztecs Celebrated Day of the Dead First

Rituals celebrating the dead ancestors have been observed in pre-Colombian civilizations (namely, the Aztecs) for as long as 3000 years before the Spanish invaders. They too involved skulls in their celebrations, usually the skulls kept as trophies, displayed during important rituals. But things weren’t as spooky as they sound: they also had plenty of party and themed food to go with the celebration: the ninth month of the Aztec calendar (starting more or less in the beginning of what we call August) coincided with a month-long festival meant to honor the dead. 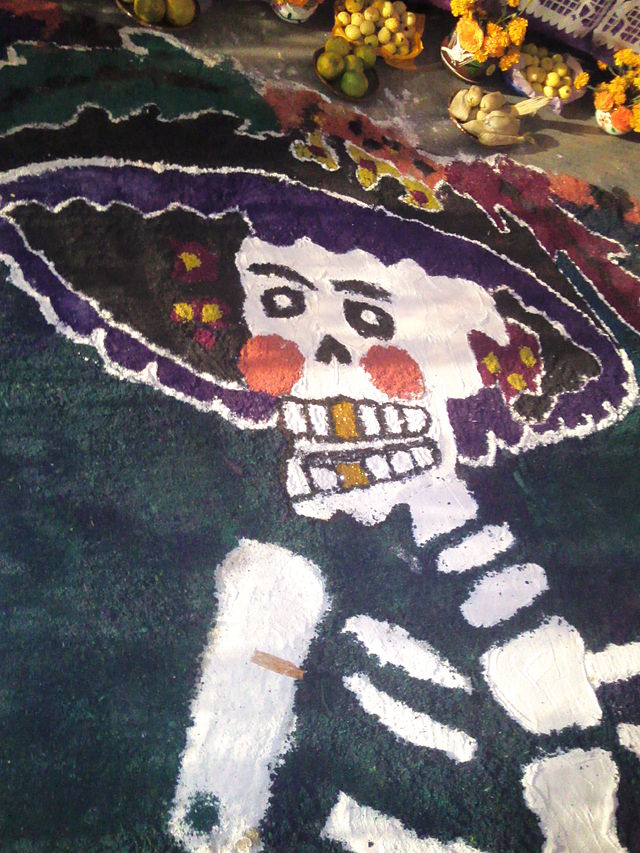 What little facts have survived about the Aztec culture indicate that the festival held in late summer was dedicated to the goddess Mictecacihuatl, known as the Lady of the Dead. She was a benevolent ruler figure of the Underworld, similar in a way to the Ancient Greek Persephone. The Aztec goddess next was next revived under a slightly different form as Catrina (pictured above), the modern skeleton woman that presides over the Day of the Dead celebrations in Mexico and beyond. Catrina was originally painted by Jose Guadalupe Posada sometime between 1910 and 1913, and today images of her are everywhere, and mask designs emulating her look are proudly worn by women and girls in every Day of the Dead celebration.

Once the Spanish days began and the Aztec civilization was pretty much gone, that didn’t involve waving good-bye to all of the former traditions. This festival of honoring the dead was among the best-preserved holidays, possibly because the new Christian religion brought by the Spanish has a strong ancestor cult as well.

Day of the Dead Traditions in Mexico and Latin America

On the Day of the Dead, celebrated today on October 31, November 1 and 2, people in Mexico get together and prepare themed candles, trinkets, special foods (like Pan de Muertos, a special bread-cake, or little sugar skulls) and offer them on the graves of their deceased relatives. They also place these items in their homes (at little altars) and share them with friends and neighbors. Many of the consumables are offered to kids, since they have more of a sweet tooth than adults, and they also are believed to have a special relationship with the spirits of deceased children, angelitos (“little angels”). In the areas that observe this holiday, you can see whole families walking to the graveyard to offer these gifts to their loved ones who had passed away, and then returning to town to celebrate. You can even see a wedding taking place during the festivities, from time to time.

But what is most remarkable in the Mexican festivities is that many people use this time of the year to express their creative ideas in the festival-related art activities. You can, for example, wear an elaborate Catrina-inspired costume or paint your face, or get a temporary tattoo and so on. (You can easily find a diy tutorial on the internet for all of these, explaining how to paint your face or make a costume or masks, in case anyone is interested).

Speaking of Day of the Dead-inspired art, Sylvia Ji is an artist that became especially known for her paintings portraying a girl with skeleton make-up. You can browse some of her pictures and drawings here. If you’re interested in exploring the foods traditional to this celebration, you can find an accurate collection of recipes here.

Beyond everything else, what we should understand about this holiday is the fact that the Day of the Dead is first and foremost a celebration of life. In spite of its gory symbols and decorations, and in spite of its present-day consumerism (with its Hollywood-like sexy costumes and over-shopping for candy), this celebration’s meaning is honoring life and living in the now, by remembering that we are mortal and the ancestors behind us were once living people. The Day of the Dead is the pre-Colombian world’s own Carpe Diem (Seize the day).

What Happens When you Die? Afterlife in Different Cultures
Previous Post: « Can You Learn How to Lucid Dream?
Next Post: What Are the Top Historic Homes for Sale in 2014? »