Especially as we have become more knowledgeable about the world and more comfortable with the differences between cultures, anthropology became a more and more interesting science in the Western world. Finding out more details about the others, as distant and exotic as possible, became something not only interesting, but mandatory to all so-called civilized societies which value science and reason. Some say this fascination is nothing more than an attempt to capitalize the exotic, others say that it’s a typical and institutionalized result of white man’s guilt. But there are also more benevolent viewers of anthropology who celebrate it as a way of getting to know more about ourselves and what it means to be human, through the means of getting to know those different from us first. 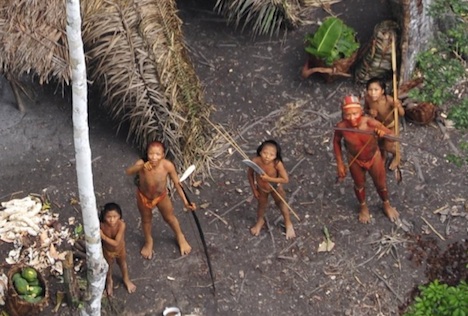 Such others, who are as radically different from us as they get, are the so-called contemporary primitives (but the word should not be used in a pejorative manner), whom most of us didn’t really believe existed today. The official monitoring was, of course, aware of the number of uncontacted tribes in remote areas of each continent, especially since the spread of satellites that make monitoring and charting easier, but the mainstream public was definitely not aware such peoples still existed. That all changed when the media covered a certain event intensely: in 2010, a helicopter crew took photographs of a previously uncontacted Amazonian tribe living in the forests around the Brazil-Peru border. The photos were then all over the news and probably everyone who saw them was equally amazed and touched by the defensive and naïve way they were holding their crude spears up in the air, trying to fight the monstrous flying machine.

Why did the uncontacted tribe come out?

But while the tribe remained somewhat uncontacted further (well, if we rule out the visual contact already described), maintaining their status of modern day contemporary primitives, things definitely changed earlier this year, in late June 2014. Something drove these people out of their isolation (which the Brazilian government was protecting from a distance) and made them travel for weeks to get closer and closer to another community, attempting to make contact with them. The contact eventually took place on the 29th of June 2014, when the so-called contemporary primitives finally reached the settled indigenous community known as the Ashaninka.

Unfortunately, what triggered this massive movement was their feeling of danger, due to illegal logging activities on the Peruvian side of the border. And this well-known tribe (known because of the spectacular photos which were published in 2010) wasn’t the only one sharing the same struggle. According to both the Brazilian and the Peruvian governments who are working together to limit the illegal logging and drug trafficking activities from the remote areas around the border, more and more tribes of uncontacted Indians are on the move, seeking help and contact as the danger approaches them.

What happens to contemporary primitives who come out of isolation?

To be clear, these illegal activities are a threat to them not only because they bring a harsh reality to a people unaccustomed with seeing some of our contemporary technologies and so on, and not even because they destroy their habitat. In fact, as experts from both governments have warned, these defenseless tribes of contemporary primitives risk full-on genocide if they do not flee from the groups performing illegal activities. Killing people for resources is not unheard of, and these people have no knowledge, or proper defense, or paperwork and official identities to protect them.

To wrap up the story of the well-known and still unnamed tribe which emerged from the forest this late June to make contact with the settled community, they now face other dangers, in spite of reaching a safe place and need not fear violence anymore. As will every other uncontacted tribe in history, suddenly having close interactions with a foreign community risks causing an epidemic and killing many of them from causes as banal as the common cold. Without being previously exposed to our common diseases and germs, the contemporary primitives do not possess the antibodies to protect themselves.

Medical personnel and government representatives have arrived at their location as soon as possible and they are all trying to make the innocent new-comers as comfortable as possible considering their world-altering situation, the latest news on the subject report. So far there has been no major incident, but all sorts of dangers still remain very real for the tens of other secluded tribes who haven’t broken their isolation yet through first contact. Hopefully, we will be able to protect them all from major harm, whether that means allowing them to remain secluded, or defending them from the shocks and dangers of coming into our world unprepared. So, in case you were wondering about our modern contemporary primitives, this is pretty much how things stand today.

How Long Does It Take To Become a CNA?

Who Are the 10 Richest People In The World in 2018
Previous Post: « Why Haven’t Any Animals Evolved Wheels?
Next Post: What Was the Weirdest Plague in History? »