Home Jobs & Education How Much Do Makeup Artists Make? 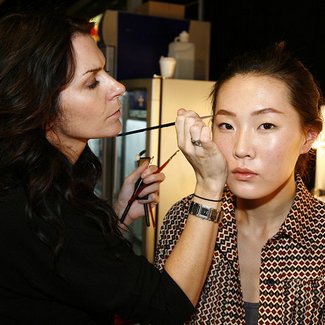 Makeup artists specialize in applying makeup to performing artists in theatre, television, and movies in order to enhance their appearances, portray a certain character, or reflect a distinct time period.

Makeup artists are typically responsible for consulting with directors and performers about the desired effects within a makeup plan, duplicating makeup from prior days to ensure artists’ appearance remains the same, developing plans on the use of makeup according to script directions, and reapplying makeup as necessary through live performances.

Salary
How much does a makeup artist make? According to the Bureau of Labor Statistics records from May 2012, the 1,950 makeup artists employed in theatrical and performing arts throughout the United States earn a median annual makeup artist salary of $67,580, or $32.49 per hour.

The bottom ten percent in the profession earned $22,850 or less, while the top ten percent of makeup artists break through the six-figure salary mark with an average salary of $117,720 each year. Makeup artists employed by amusement parks and arcades earn considerably less than average at $42,340, but those that work in motion picture and video production industries bring home the highest wages of $83,290 on average.

The top-paying states for the field are unsurprisingly New York and California, where makeup artists make a mean $91,640 and $71,470 each year.

Although makeup artists often work indoors in dressing rooms or clients’ homes, some may need to work outdoors in a variety of weather conditions at filming locations. The majority of makeup artists work irregular evening and weekend hours in order to align with performances in the performing arts.

Job Outlook
Employment for makeup artists is expected to grow faster than the national average for all other occupations coast to coast at a rate of 18 percent between 2010 and 2020. Job vacancies and job opportunities will continue to be in large metropolitan media-heavy cities, including New York City, Los Angeles, and Chicago. Makeup artists can ensure the most promising job prospects in their craft by receiving extensive training at the certificate, diploma, or associate’s degree level in cosmetology.

How Much Does A Phlebotomist Make?

The term midwife refers to one of two different kinds of professionals: nurse-midwives and direct-entry midwives. Nurse-midwives are well integrated...