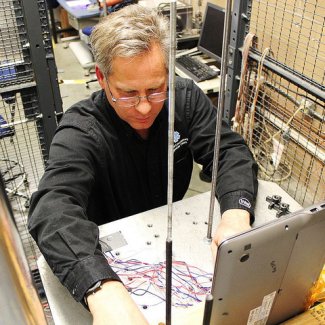 Computer engineers solely ensure that all components of computer hardware function properly together with all of the latest software.

Salary
How much does a computer engineer make? According to the Bureau of Labor Statistics records for May 2012, the average computer engineer salary is $103,980 per annum, which is equivalent to a mean hourly wage of $49.99. The bottom ten percent earns an average $63,970, while the top ten percent makes significantly more with an annual salary of $150,130.

Computer engineers that are employed within computer systems design services make $104,120, but those working in scientific research and development services earn significantly less than average at $99,290. The top-paying industry for computer engineers is within software publishing, where they bring home an impressive annual mean salary of $115,920. Computer engineers are paid the most in Michigan at $116,380, but California comes in at a close second at $114,560.

Work Environment
Most computer engineers work in research laboratories to build and test a variety of different computer models. Others are employed in high-tech manufacturing firms, computer system design firms, research and development, and for the federal government. Interestingly enough, more than 95 percent of all computer engineers are employed within a large metropolitan area in the United States, where there are 79,580 jobs for these specialized engineers. Although the majority works full-time, over 25 percent work more than the normal 40-hour week on their research at irregular hours.

Employment for computer engineers is expected to grow slower than average at just 9 percent between 2010 and 2020. Foreign competition will continue to negatively impact the growth of this profession, although there will be a limited number needed to fulfill the demand for new innovative technology. Most job growth is expected to occur within computer consulting firms, where they can work with more closely with software developers.

Computer Engineering Salary: How Much Can You Make in the Field?

What Does A Computer Programmer Do?

What Are The Top Computer Science Schools In The U.S.?

What Do Network Administrators Do?
Previous Post: « How Much Do Insurance Agents Make?
Next Post: How Much Do Registered Nurses Make? »