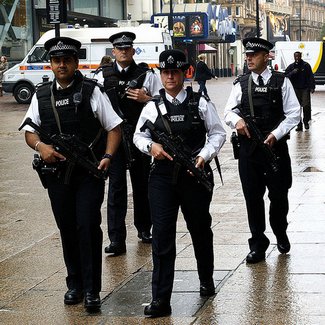 Police officers are given the duty of patrolling their jurisdiction to investigate all suspicious activity to protect the lives and property of the public.

Uniformed police officers are responsible for enforcing laws and regulations, responding to calls for emergency service, conducting traffic stops and issuing tickets, arresting offenders or suspects, writing detailed reports for recordkeeping, and preparing cases to testify against criminals in a court of law.

Salary
How much does a police officer make? According to the U.S. Bureau of Labor Statistics, the 632,000 police and law enforcement officers employed in the United States earn an annual mean police officer salary of $57,770, which is equivalent to an average hourly wage of $27.78.

Work Environment
The majority of police officers find employment with local, state, and federal law enforcement departments to carry out their duties of protection. However, police officers are also employed within colleges, universities, elementary or secondary schools, hospitals, psychiatric hospitals, and various security services. As one of the most physically demanding and dangerous careers, police officers have one of the highest rates of injuries and fatalities on the job.
Most police officers are schedule to work full-time hours during shifts, but paid overtime is common to provide protection to the public around the clock at all hours of the day.

Job Outlook
Employment for police and other similar law enforcement officers is expected to grow considerably slower than the national average for other occupations at just 7 percent from 2010 to 2020. Demand will continue to grow with new openings at local departments, but gaining employment as a police officer at the state or federal level will be increasingly competitive. Bilingual applicants with a bachelor’s degree and prior experience in law enforcement are expected to have the most promising outlook at federal criminal justice agencies.

How Much Do X-Ray Technicians Make?
Previous Post: « How Much Do Interior Designers Make?
Next Post: How Much Does a Psychologist Make? »