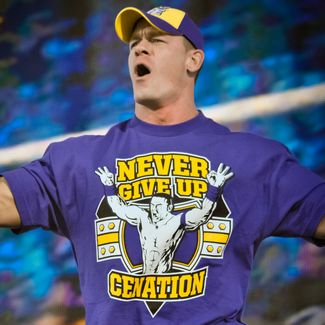 John Cena is one of the most famous American wrestlers of all time. But besides being a massive name in the WWE world, Cena is also a successful actor and TV personality, with some forays into music under his belt as well. He made the jump from professional wrestling to Hollywood to universal acclaim and he’s gearing up to take on some exciting roles in the years to come. So how much is John Cena worth in 2019? Let’s take a quick look at his multi-hyphen career and crunch the numbers.

Cena has been with the WWE since 2002 and is one of the most decorated wrestlers of all time. It is believed that the John Cena brand is worth close to $100 million to the WWE, which means that John Cena’s net worth is only poised to grow over the near future.

It was clear from the beginning of his wrestling career that Cena was going to be something special. The star began training to become a wrestler back in 1999. His WWE debut took place in 2002 and he was initially promoted as the United States Champion. However, his rise to the very top was complete in only a few short years – he became the WWE Champion in 2005. Right about the time when fans started Googling how much is John Cena worth?

Since then, he has gone on to win WWE’s top prize more times than any other wrestler. His longest time as champion was the period from 2005 to 2007 and 2008 to 2010. Cena has gone through feuds with all the top superstars in WWE, such as Triple H, Edge, Randy Orton, The Rock, and The Undertaker. Since 2017, Cena has been declared a free agent, so he could work for both the Raw and SmackDown brands. In 2018, he was awarded the Muhammad Ali Legacy Award Winner by Sports Illustrated. Forbes named Cena as one of the highest paid wrestlers ever in 2018.

We can’t talk about how much is John Cena worth without mentioning his film efforts. Not content solely with wrestling, Cena branched out into movies when he took on a leading role in the film The Marine, which came out in 2006. The movie was a success, getting in around $18 million in the box office and $30 million in DVD sales/rentals. He then starred in 12 Rounds and Legendary, two movies produced by WWE Studios that had a limited theater run.

In 2015, Cena appeared in comedies Trainwreck, Sisters, and Daddy’s Home. He also did voice acting for Surf’s Up 2: WaveMania and Ferdinand and later appeared in Daddy’s Home 2. In 2018, Cena starred in popular and acclaimed comedy Blockers and had a role in the Transformers prequel Bumblebee. Similarly to The Rock, his transition from wrestling to Hollywood was a smooth one, with Cena expected to further expand his horizons in the years to come.

With so many talents, you’re probably curious to know how much Cena earns. We’ll cut to the chase – in 2019, Cena is estimated to be worth $55 million. While his fortune was mostly built thanks to his wrestling career and acting adventures, Cena proved that he’s never afraid to branch out when he released his debut rap album, You Can’t See Me. Besides, plenty of his money comes from brand endorsements – he appeared in plenty of commercials for various brands.

John Cena is not a huge spender. He is reported to be a brilliant man with a keen business sense. He always looks to make the most of his brand name and invests his money wisely.

However, he does have a luxurious mansion in Land O’Lakes, Florida, which he bought for close to a million dollars.

Born John Felix Anthony Cena Jr in West Newbury, Massachusetts, the wrestler is of half Italian descent and has four brothers. He played football in college and graduated in 1998 with a degree in exercise physiology and body movement. Before making it as a wrestler, Cena worked as a limousine driver.

He was married to Elizabeth Huberdeau, but the two got divorced in 2012. The star then dated fellow wrestler Nikki Bella. The two broke off their engagement in early 2018. He briefly moved to China in the same year, where he created a YouTube show on WWE’s channel.

Cena is also well-known for his philanthropic work. He has granted over 500 wishes for children through the Make-A-Wish Foundation – the most in the charity’s history.

What Is He Up to Now?

Besides his wrestling career, right now Cena seems to be focused on his acting. He was cast in the ninth Fast and Furious flick and is in negotiations for a role in James Gunn’s Suicide Squad sequel. Moreover, he will star alongside Jackie Chan in 2020’s Project X. If you’re eager to see Cena on television, you can tune in for Nickelodeon’s Are You Smarter Than A 5th Grader? revival, which he hosts starting June 2019. As you can see, he liked to keep busy. His net worth will certainly only increase from this point on.