Carnivorous, omnivorous, or herbivorous, turtles have a mixed diet, just like humans. They’re a diverse bunch and their eating habits are strongly connected to their habitat. As there are more than 300 species spread all over the world, you can imagine that their feeding preferences vary depending on their type too. But what do turtles eat?

Well, the environment in which they live in, from oceans to deserts, from Eastern woods to Western lakes, is by far the most important aspect that influences the animals’ feeding behavior. While many people would love to have a turtle as a pet, few really take the time to understand these creatures and make sure that both their habitat and diet are adequate. Read on as we will discuss the differences between several turtle species and take a closer look at what these fascinating reptiles like to eat.

What do sea turtles feed on?

What do turtles eat? is a complicated question, as the answer depends on a multitude of factors. Let’s take them one at a time.

To begin with, sea turtles, which live in every ocean of the world, love soft food. Therefore, their diet consists of soft aquatic life like algae and includes jellyfish and sponges. Some of them feed on shellfish too, but this has been observed only in the case of turtles with strong jaws. There are seven types of sea turtles out there: leatherback turtles, green turtles, loggerhead turtles, Kemp’s ridley turtles, hawksbill turtles, flatback turtles, and olive ridley turtles.

Among these, some are pure herbivores. Green turtles are the ones who like to munch on veggies. As a fact, leatherback turtles eat only jellyfish, while snapping turtles are a species of freshwater turtles which feed on small fish and crickets. 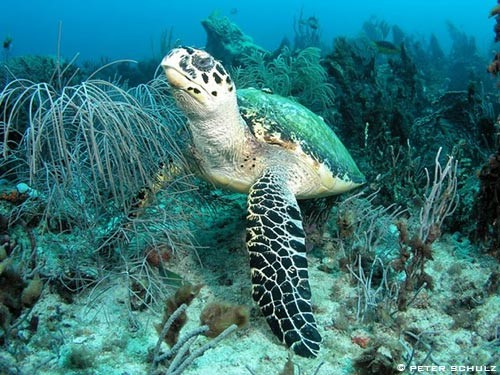 Hawksbill turtles are a special kind. They are ‘spongivores’, which means their diet is composed mainly of sea sponges. According to the MarineBio Conservation Society, these turtles are quite selective when it comes to feeding preferences, choosing only certain types of sponges, which can be toxic to other animals. Apart from this, they also eat comb jellies, algae, mollusks, and sea anemones. Sadly, they are a critically endangered species.

Another endangered species is the Eastern Mud Turtle, which lives in ponds and freshwater habitats. Commonly found in the US, mud turtles are the greatest in number in Mexico. All of them are carnivorous, preferring fish. Yellow mud turtles, though, appreciate a more balanced diet, eating vegetation as well.

Leatherback turtles are known as the heaviest of the species, some able to weigh almost 2000 pounds. Alligator turtles are among these. They usually fancy live food, but as they are almost entirely carnivorous, relying on dead organisms as well. Their diet typically includes fish, but they can also eat snakes, worms, water birds and even other turtles (!). Leatherback turtles are also critically endangered.

As far as small turtles are concerned, there is a species known as the common musk turtle, which is also carnivorous. They eat aquatic invertebrates like worms, and fish. Among the omnivorous species of sea turtles there are the loggerheads. These have incredibly powerful jaws, which help them crush their prey. Their diet is diverse, so turtle food can vary: they eat sponges, corals, sea cucumbers, jellyfish, mollusks, flying fish, and even squid.

The still waters of ponds, lakes, streams or rivers are preferred by softshell turtles, which feed on fish, insects, crustaceans, and mollusks. Among other river turtles, there are the yellow-spotter turtles. These are omnivorous, eating fruit and weeds, as well as fish and invertebrates.

The painted turtles are worth mentioning as well. Known as the ‘sun turtle’ because they love sunbaths, they like to hunt along water bottoms (what a paradox!). They eat both plants and fish and have nothing against dead animals.

So what do turtles eat? As you can see, pretty much everything. Still, each turtle species has very specific feeding habits.

What about terrestrial turtles’ feeding preferences?

Changing the habitat, terrestrial turtles come in several shapes and forms, just like their water cousins. Some of the most commonly known are the ornate turtles, also called box turtles. As regards their feeding preferences, they are the least pretentious of the bunch. They eat everything from grass, berries and veggies to insects, caterpillars, and earthworms. For them, almost anything can be turtle food. 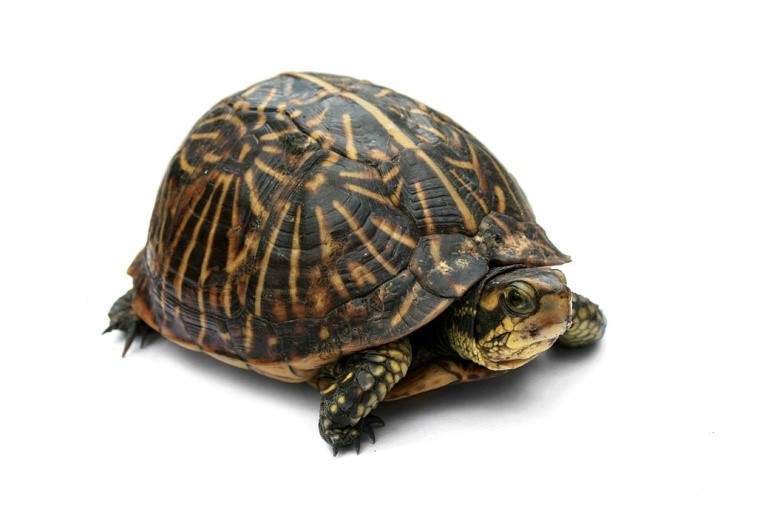 Gopher turtles are among the herbivorous terrestrial scavengers as well. Their diet consists of a very wide range of greens, from grass to veggies like mushrooms, or fruit such as apples and berries. Aquatic and land turtles can have weird tastes when it comes to food as both types have subspecies that eat carrion (dead fish, decaying matter).

What do turtles eat: does their diet change over time?

Actually, yes. Another important factor that influences a turtle’s diet is age. Leaving the map argument aside, their feeding behavior varies and even changes as they grow up. Adult turtles like to munch on aquatic plants as well as on insects, worms and snails, while young turtles are almost entirely carnivorous.

Not surprising since proteins are essential for their growth, just like for humans. What is interesting to notice is that, gradually, as turtles reach maturity, they change their habits. What was once a carnivorous baby turtle may become an omnivorous mature one. So when asking yourself what do turtles eat, don’t forget to consider their age.

Size matters too when it comes to food. Large turtles are typically carnivorous, but there are also some small freshwater species known as mainly meat-eaters.

What do pet turtles eat?

Do you like turtles and consider buying one as a pet? In this case, you probably wonder what turtles eat in captivity and how you should feed them depending on their species.

First, you can keep freshwater turtles and small terrestrial ones as pets. But you should take notice that captive turtles have different diets according to their species, age, and typical environment, just how wild turtles do. As previously mentioned, the essential aspect when it comes to a turtle’s feeding behavior is its habitat. The best you can do is to make sure your pet has a proper environment where it can live and age in peace.

When buying a turtle, it is important to establish its type and age and feed it accordingly. Baby turtles can be fed every day, while adult ones should be fed only two to three times a week.

As for the perfect diet, balance is the key. Try to mix veggies with aquatic vegetation and meat (earthworms and fish). Always ask a specialist. Boxed turtles and painted turtles, for example, have similar diets. They like eating vegetables, fruits and insects. Red-eared slider turtles, on the other hand, known among the most popular pet turtles, like to feed on raw fish and earthworms. Check out the infographic below for more info on what do turtles eat. 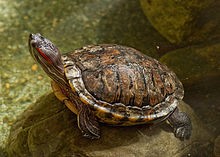 Besides turtle food, your little companions will need vitamins and calcium for a long and healthy life. You can buy these from pet stores, where you can find a wide range of foods as well. Finally, don’t forget to keep the tank clean. There are many turtles that love to eat underwater.

Turtle vs. tortoise: what is the difference?

While the terms turtle and tortoise are often used interchangeably, each belongs to a different family classification. Generally speaking, tortoises usually dwell on land, while turtles live in water environments. Both also come with different physical attributes – a tortoise is larger and has a dome-shaped shell, as well as bent legs with small feet. Meanwhile, turtles generally have flat and streamlined shells, and their feet are webbed with long claws (adapted to for swimming).

Things to know before getting a pet turtle

While turtles aren’t as cuddly as cats or dogs, they make for fascinating pets. They’ve been around for millions of years and can live a long life, as long as their owners take the time to care for them properly. You’ve already gotten the answer to What do turtles eat?, so let’s focus on other factors you should take into consideration before visiting the pet shop.

First off, turtles can make great pets for families with older children. Younger ones may forget to feed them, drop them during playtime, or forget to wash their hands after handling them. Not ideal. As you already know, there are many different species of turtles, but the ones most commonly brought as pets are box turtles and red-eared slider turtles. These are also the easiest species to care for.

Moreover, keep in mind that a turtle can live for decades. There are plenty of instances when pet turtles are passed from generation to generation within families. Also, if you’re thinking about buying one for a child, think about the fact that you might be caring or it long after that child has left for college. If you’re not ready for such a long-time responsibility, getting a turtle might not be for you.

Like most species, turtles have very specific needs. They are more low-maintenance than dogs, for instance, but they still need controlled temperatures, a large housing area with water to swim in, a varied diet, heat lamps, regular veterinary visits, and more. Additionally, they are social creatures, so getting two or three is ideal. A single turtle will get lonely, even if you give it attention on a daily basis.

Finally, remember that all turtles carry salmonella, a species of bacteria common to many reptiles. In people or other mammals like cats and dogs, the bacteria causes gastrointestinal problems. To avoid any issues, always wash your hands after handling the turtles or cleaning out their habitat.

We hope that the information above answers the question What do turtles eat? If you have any further inquiries or are ready to adopt a pet turtle, we suggest you contact a vet for more details about what you need to do before taking the leap.

How Much Do You Tip Movers? + Infographic

What Is the Average Personal Trainer Salary + Infographic

Why Do Dogs Eat Grass?
Previous Post: « Orthodontist Salary: How Much Do These Specialized Dentists Make?
Next Post: Books: What’s the Difference between Paperback and Mass Market Paperback? »